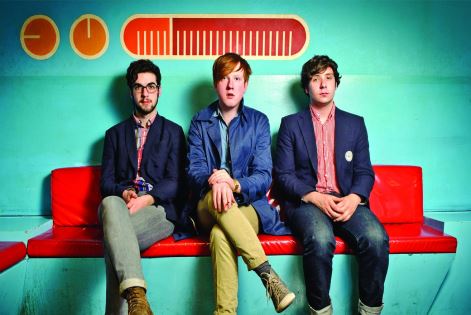 This is the band’s first UK festival date following their recent announcement of “new music, new shows, new everything” for 2016. They will be joining the already announced headliners, Madness and The Darkness.

Also announced are Scottish hard rockers GUN and folk-rockers Turin Brakes who enjoyed chart success with their smash hit ‘Painkiller’. Canadian multi-instrumentalist Son Of Dave will also be joining the bill, as will contemporary folk musician Bella Hardy, whose latest record ‘With The Dawn’ – her first since being named BBC Radio 2 Folk Singer Of The Year in 2014 - has been released to much critical acclaim.

Scottish band Astrid, who surprised many this summer announcing they would be returning to the studio to record a fourth full-length album after a decade apart will be playing at Belladrum for the first time, along with infamous Glaswegian sound system, Mungo’s Hi Fi, who will also be performing at this years SXSW festival.

Best Live Act winners from this years Scottish Alternative Music Awards Colonel Mustard & The Dijon 5 will bring their entertaining show to the festival, along with three crowd favourites from 2015 who are all returning to perform: Keston Cobblers Club, Coco & The Butter Fields and Blackbeard's Tea Party.

There are many more acts still to announce for the festival which, now in its 13th year, has the theme ‘Superstition’ in 2016. A limited number of Saturday day tickets are now on sale via Skiddle and retail agents: Eden Court and The Ironworks in Inverness; Sweet Treats in Dingwall; and Morrisons in Beauly

For the second year running, there will be an option to buy three day tickets to include a programme of artists on the main stage on the Thursday night, in addition to the traditional two day tickets. Campervan/ caravan have now sold out but electric hook-up upgrades are still available.

Thursday car parks and camping areas will be open from 0800 in 2016 are arenas at 12 noon in an effort to encourage patrons to arrive in a steadier flow throughout the day and to reduce traffic congestion. Arena opening times will also be brought forward for the Thursday and details will be released in due course.

When buying tickets on-line with Skiddle, Bella patrons are being given an opportunity to contribute to the Archie Foundation, a charity which is helping to improve hospital facilities in the Highlands.

Bella sold out in record time in January in 2015, and has sold out each of the last seven years, often months before the event so fans are urged to buy early to avoid disappointment. E-tickets are more customer-friendly and less easy to scam, but printed tickets are also be on sale via the usual retail outlets.

Belladrum Tartan Heart Festival takes place in the beautiful Highland surroundings of Belladrum Estate, near Beauly in Inverness-shire. The independent festival has built a reputation for its eclectic line-ups, its offbeat non-musical entertainments and its all-ages approach. The festival won a VisitScotland Thistle Award in 2009 and is a past winner of the Grassroots Festival Award at the UK Festival Awards, the festival industry’s ‘Oscars’.

Published on 27 January 2016 by Ben Robinson