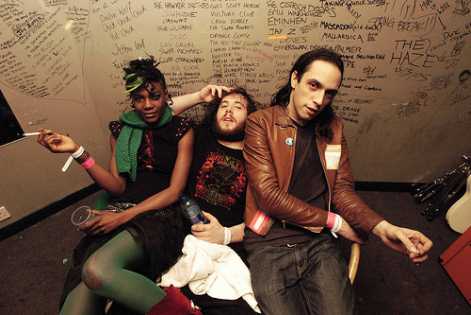 Blissfields Festival, Hampshire’s longest running boutique festival, is proud to announce that Noisettes and Patrick Wolf will headline the 12th annual event, returning in 2012 to The Park, Woodmancott on the weekend of 29th June to 1st July.

Having launched its regional talent search, Road To Blissfields, and unveiling its comedy bill two weeks ago, organisers are delighted to be able to unveil the first batch of artists for this summer’s installment:
Noisetteswill offer the Saturday night headline crowd some of the biggest pop tracks of the past few years, including ‘Don’t Upset The Rhythm’ and ‘Never Forget You’, while Patrick Wolf has confirmed a special acoustic performance with a grand piano, which will undoubtedly be one of the most beautiful moments in the festival’s history.
Following an appearance on Jools Holland, and tipped across the board as a one to watch in 2012, Spector join Blissfields for a dizzyingly high-paced guitar pop show with a Nick Cave-esque chic. Catch the sharply dressed London outfit’s latest video HERE. Also championed as a one to watch this year by MTV, NME and Pitchfork, Charli XCX brings her gothic glam-pop to Blissfields, with a sharp live set of big beats and pouncing vocals. Watch her latest video, ‘Nuclear Seasons’, HERE.
Having claimed the front cover of The Fly magazine, Lucy Rose is also confirmed for the 2012 event; with Man Like Me, Toddla T, Crazy P (Live) and festival favorites Subgiant and Dub Pistols also set to perform. For the first time ever, Blissfields will welcome a leading tribute act to one of the country’s most loved acts, inviting Fleetwood Bac to perform a Saturday afternoon slot this year, as the festival’s youngest ever booking and Metallica-championed Mini Band, along with many more acts still to announce, complete this first announcement.
On Thursday night, the second stage will welcome acts from this spring’s Road To Blissfields competition, where acts across six towns play to win a slot at the summer event. Judges, including festival heads, local music promoters and journalists, as well as Blissfields Facebook fans (via www.facebook.com/blissfields) will pick one band from each heat to perform at the opening night, headlined by Imperial Leisure.
For the first time, Blissfields will open the fan-favorite Hidden Hedge Stage during the day, showcasing live music and DJ’s from paradYse Records, Express FM, Beans On Toast, Turf Records and new music from Blissfields Festival. Last summer, Blissfields launched a new Comedy Stage that proved so popular it’s back in 2012 headlined by Never Mind The Buzzcocks’ warm-up comedian Andrew O’Neil.
Blissfields '12
The festival has been applauded over the past 11 years for its attention to detail, creativity, family friendly atmosphere and wide-ranging musical and arts bill, but above all, for remaining at an intimate 2,000 capacity, following years of critical praise, stellar live performances from some of the country’s biggest live music acts, and sell-out crowds.
Last summer; Tricky, Frank Turner, Summer Camp and King Charles joined acts including Mumford & Sons, Laura Marling, Super Furry Animals, Ben Howard, and Mystery Jets, as part of Blissfields musical heritage.
In 2012, Blissfields nod their school cap to the world of sport, offering a dandy revival of the Great British Summertime and a golden age of playground camaraderie and frivolity. With a full program of sports day shenanigans, a school disco and late night ballyhoo, expect your mischievous tutors to be on fine form as they guide you through the most fun you’ll have with your chums all year. Hoorah! Hoorah, indeed!
This year you’ll have the opportunity to represent your House, as well as vote for House Captains, once again giving fans of the festival another way to be a part of the makings of the event. Although Blissfields will not be strict on the dress code, they warn that Hall Monitors may have to be assigned to make sure you are all upholding the Blissfields reputation.
Grab your jolly hockey sticks and catch us round the back of the bike shed for the best “last day of term” style fun you ever had.
This year’s full line-up of activities will be announced shortly.