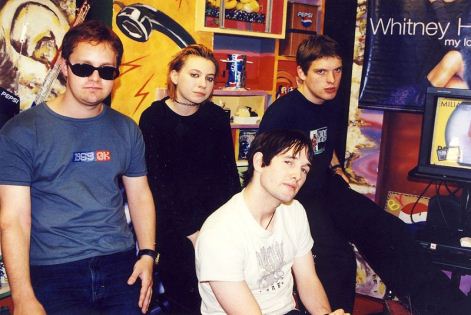 Starting from today we will be unveiling the A to Z of Camp Bestival 2013. Giving you the lowdown on some of the treats we’ve got in store for our Lulworth Castle jamboree from August 1st to 4th, we’ve got an absolute belter to kick things off.

Rob da Bank says: 'I'm always checking out what our Camp Besti fans wanna see and Ash have been in there since we began so it’s a corking way to kick off our A-Z...We've just sorted a great 'B' and ‘C' but got the other 23 letters to sort. Watch this space'.
We’re over the moon to be able to announce that one of our favourite bands of all time, Ash are coming to the party to get the Castle stage crowd jumping! It’s hard to believe but our northern Irish heroes have been rocking it out for 21 years, racking up one of the best armouries of sing-along good time tunes known to man. From Girl from Mars and Angel Interceptor to Shining Light and Burn Baby Burn they’re second to none when it comes to showing a crowd a good time. And, of course, they’re the perfect act to kick off our A to Z, as they’re no strangers to alphabet based high jinx, having released their own A to Z series of singles during 2009 and 2010!

Ash told us: ‘Ash are really excited to announce they are playing this year's Camp Bestival. This is our first time at Camp Bestival and we can't wait! We've heard a lot about it and are always being asked by fans if we're playing there. It's an honour to be included in this year’s line up! Roll on summer!’
Speaking of the A to Z, keep your eyes on our Facebook and Twitter in the coming weeks as we’ll be unveiling a whole world of fun that we’ll be bringing you at the start of August. With something for everyone, it’s the ultimate family festival with our Around The World theme, musical treats like Richard Hawley and Billy Bragg and one of the best DJ line-ups anywhere in the world with Grandmaster Flash, Sasha, Fabio & Grooverider and Andrew Weatherall & Sean Johnston’s A Love From Outer Space. There’s plenty of disco action to be had too with Kid Creole & the Coconuts’ coruscating live show and The Cuban Brothers rolling out the 70/80/90s good times, we’ll all be dancing round our handbags long into the night. And we haven’t even touched on kids’ discos every day in Bollywood, Art Town, our brand new Dance Space, the redesigned Dingly Dell, lots of brand new stuff for 2013 and so much more. So make sure you keep checking back to discover the goodness!

Finally for now, don’t forget your little’uns have an opportunity to win a weekend camping ticket for you your family in our Around The World Colouring-In Competition judged by Dick n Dom! To be in with a chance of joining us all they have to do is help to get our team of animal explorers ready to travel 'Around The World' by giving them a bit of colour.  You can download the picture that needs colouring in from this page. Entries need to be in by March 18th, so what are you waiting for!  Good luck!