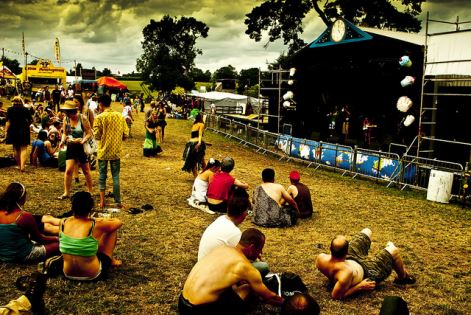 If you go down to the Hidden Valley this year... You're in for a wayward, ragtag, glitter-splattered surprise! The festival that started off as a family barbecue has reached it's 15th year and is looking bigger, better and more exciting than ever.

The Noz family have triumphed in securing a musical line up to give larger festivals a run for their money. Headline acts this year include The Correspondents, Electric Swing Circus, The Wytches and Misty Miller meaning there is a range of music from electro-swing to bluesy rock in order make sure there is something for everyone.
The music line up for 2013 can be honestly described as phenomenal for such a small festival. This ultimately means that fans of the ever sought-after 'small festival vibe' can be obtained without missing out on seeing world class acts. Plus with the added bonus that, unlike Glasto, if you lose your mates, you'll probably see them back at the tent in about 20 minutes! Nominated for The UK's Best Dance Festival award and Most Family Friendly Festival Award - they hope to be in with a chance for the Best Grassroots Festival award this year.
Anyone who's been to Nozstock before realizes that it's about so much more than just the main line up. Get your cowboy boots on for a dance down the Tribe of Frog woodland area because the theme for 2013 is Wild Wild West! No doubt endless water pistol shoot downs and cries of 'This festival ain't big enough for the both of us!' will be in the pipeline.
The Sika Studios crew will be taking over the Bullpen and showing North Herefordshire how it's done as beats and rhymes are dropped by the finest lyrical wordsmiths. The crew have collaborated with High Focus Records to bring you the best in underground Hip Hop such as Dr Syntax, Fliptrix and Leaf Dog. Other new areas at the festival are just as exciting - we hear rumors of a techno and deep house stage, a new chill out zone, extra family camping, an extra special children's area and much more.
If comedy is your bag you'll be getting yourself down to Nozstock's exciting tent of absolute jokers with such elegantly sophisticated acts as Mr Methane, Tom Binns and Ian DeMontford. Later into the night that very same tent will transform into a magical electro-swing parlour with a club vibe so eager festival goers can Lindyhop the night away.
"Do the King Porter Band think they can stomp harder than I can? We'll see...." Spoke the festival's top security guard on his new twitter account @BacontheBull... (Who this year happens to be none other than an actual bull called Bacon. His territorial triumph last year was to chase a few scared interlopers up a tree and has since been promoted from mere farm regular.)
Creative Director aka Ella, Mr Nozstock's daughter, says that the reason they do the festival so that people can have a weekend full of the most fun they could humanly have. Ella always looks forward to Andy C arriving and hopes this year's arrival will be as comical as the time he ran out of petrol and allegedly had to borrow some lawnmower fuel from a starstruck local teenager. The Noz family warmly invite you to their fabulous, family friendly, party friendly festival full of eccentric silliness and colourful extra bits and pieces which help to make it just that bit extra special. Bring your kids, your mates, your Mum or your Great Uncle Ted - there'll be something to please everyone!
Roll on Nozstock!

Published on 24 June 2013 by Shoshanna Jones