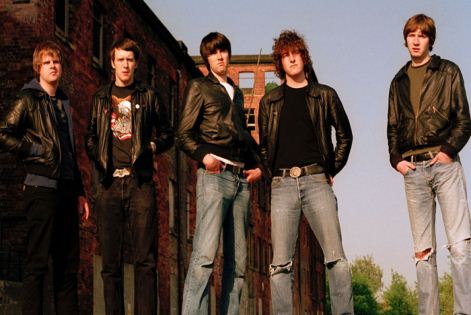 The Pigeon Detectives are back with the first single ‘Animal’ and announce a UK tour.

Having sold over 500,000 albums, The Pigeon Detectives are back with the first single ‘Animal’ taken from their fourth studio album due later in the year.

The track is now available as a free download via the bands website. The single will also be for sale via all good online retailers from 28th January 2013.

"Animal is one of those songs that we knew would work well in front of a live audience as soon as we started writing it. It's an exciting tune with a raw sinister edge to it, but it still retains all the catchiness usually associated with The Pigeon Detectives. We all agreed it was the song to set our stall out with and the in your face guitars is a statement of intent." Matt Bowman (vocals)
The Pigeon Detectives aren’t just still standing, they’re about to embark on their most honest, raw, real and exciting phase yet. We suggest you get on board.
UK HEADLINE TOUR DATES:
APRIL
Thu 25 - Preston 53 Degrees
Fri 26 - Whitehaven Civic Hall
Sat 27 - Sheffield Leadmill
Sun 28 – Stoke Sugarmill
Tues 30 - Norwich Waterfront
MAY
Wed 1 - Birmingham Institute
Thu 2 - Middlesbrough Empire
Fri 3 - Glasgow Arches
Sat 4 - Live at Leeds
Mon 6 - Cambridge Junction
Tue 7 - Nottingham Rescue Rooms
Wed 8 - Bristol Thekla
Thu 9 - London, Dingwalls
Fri 10 - Brighton Coalition
Sat 11 - Portsmouth Wedgewood Rooms

Published on 24 January 2013 by Wayne Feltham