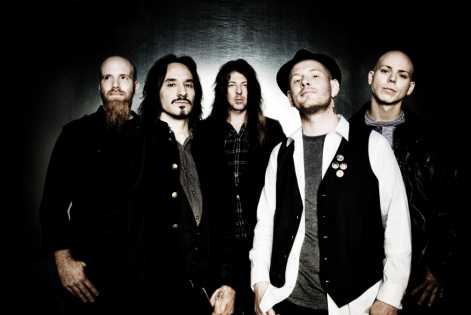 The shows will be their first since the hugely successful 'Audio Secrecy' album cycle, which saw the band rack up gold album sales in the UK, headline the mammoth Download Festival's Stage 2, and sell-out a UK tour, including two nights at Hammersmith Apollo.

The tour comes hot on the heels of the release of the first part of their ambitious and expansive new album project, 'House of Gold & Bones'.  The album concept is a two-disc beast with the initial CD - and first half of the 'story' - hitting stores on 22nd October and the concluding disc materialising next Spring.

Frontman and lyricist Corey Taylor, himself a Sunday Times best-selling novelist with last year's 'Seven Deadly Sins', wrote the lyrics for the 24 tracks that make up the 'House of Gold & Bones' as a linear storyline, that tells the tale of a character at a crossroads in his life.  The release of 'Gone Sovereign' and 'Absolute Zero' is the initial part of an unveiling, which continues as the album cycles unfold.  Music is just one medium that Stone Sour are using to tell the story that pins both albums together.  Further elements will act as a companion to the music, for fans looking to fully immerse themselves in the 'House of Gold & Bones' experience.

Taylor is suitably excited to be returning across the pond with Stone Sour, stating; "It's gonna be awesome to bring the House of Gold and Bones to fans live.  We've given people a taste of Part One, and now we're gonna bring them the best Stone Sour show they've ever seen!  It begins soon.  Get ready!"

Special guests at the London show only are the multi-platinum PAPA ROACH, who release their new album, 'The Connection' on 1st October.

In other hot STONE SOUR news, the band have also been confirmed for Australia's touring Soundwave Festival which kicks off at the end of February 2013.

Published on 23 August 2012 by Wayne Feltham