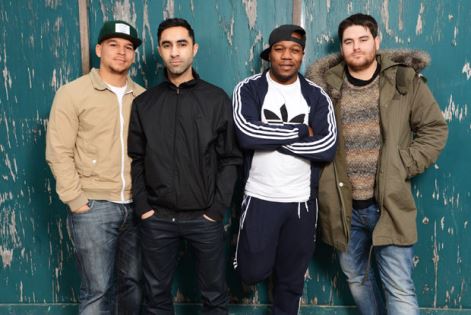 Rudimental and Tom Odell have been added to the line up for Brownstock Music Festival in Essex.

Latest line up: The Fratellis, Rudimental (dj), Mark Ronson, Tom Odell, The Pigeon Detectives, Benga & Youngman, Duke Dumont, Jaguar Skills, Roni Size,  Doorly and DJ Yoda.
Brownstock Music Festival is an independent boutique festival run by the Brown family on their farm near Chelmsford, Essex. All the family's personalities combine to create this varied and intimate small festival. It will be held this year for the 9th time on the weekend of the 30th Aug -1st Sept 2013.
Dance floor sensations, Rudimental, will headline the main stage on the Saturday night at the Essex festival. With two number ones and a Brit award nomination under their belt, this should be one of the weekend's most memorable performances. At Radio 1's Big Weekend they were "The most watched act of the weekend". They also boast YouTube hits in excess of 20 million. "Waiting All Night", featuring  Ella Eyre, reached number 1 in the UK Singles Chart on 21 April 2013. Two weeks later, Home debuted at number 1 on the UK Albums Chart. Their latest single "Right here" was released on the 5th of July.
Also added to the festival's main stage line up on Saturday 31st July will be singer song writer Tom Odell. Odell won the coveted BRITs Critics' Choice Award in early 2013 with "Another Love". His debut studio album, Long Way Down, was released on 24 June 2013.  He was discovered by  Lily Allen, who said "his energy on stage reminded me of  David Bowie". Odell's debut album, Long Way Down, was released on 24 June 2013 and reached No. 1 in the UK Official Chart.
Brownstock Music Director Mat Dixon said this about the latest additions:
"We are incredibly excited to welcome two of the hottest acts in not just the UK right now to our family shindig in South Woodham Ferrers. Rudimental were a no brainer booking and their high energy show and catalogue of top ten hits guaranteed to have the crowd bouncing along. Tom Odell on the other hand represents the incredible singer song writer talent this country consistently produces following on in the footsteps of Ben Howard and James Blake, set to be one of the absolute highlights of Brownstock 2013."
Other main acts for the 3 day festival include:
The Fratellis will play at Brownstock as part of only a handful of UK festival performances.  The Glaswegians had sold over a million copies of their debut album, 'Costello Music', in the UK alone. The peak of their achievements was picking up the Best British Breakthrough Gong at the Brit Awards, as voted by listeners of BBC Radio 1.
Mark Ronson: will play in the Essex festival's dance tent. Ronson started his career as a hip hop DJ. He is now a Grammy and Brit Award winner, famous for his extremely successful work with good friend Amy Winehouse.
The Pigeon Detectives: The platinum selling indie rock band have 3 top 40 albums. Their first, "Wait for Me" debuted at number 3 in the album charts. They have also previously supported The Fratellis, playing alongside them and the massive Kasabian.
Benga & Youngman:  Benga widely thought of as one of the pioneers of dubstep. One third of Magnetic Man, half of Radio 1 DJ duo, Skream & Benga, and producer behind Katy B's first string of hits. He even has the claim to fame of playing dubstep for Prince William and Harry!
Duke Dumont: Veteran DJ and producer. Recently reaching the UK number 1 spot with the song " Need U (100%)". The official music video for the song, directed by Ian Robertson, has over 2.5 million YouTube views.
Jaguar skills: Famous for DJing in a ninja mask which continues to add mystery to his persona as his name, age and hometown remain unknown. He is the king of crossover and mash up sets. He has a weekly 10 minute mix on Radio 1 for Trevor Nelson and gives a big festival DJ performance which will not leave people disappointed.
Roni size: Roni Size is a veteran DJ of drum and bass and Mercury Music Award winner. The well renowned Brown paper bag is still an institution of a track!
Doorly: As a Brownstock ambassador this will be Doorly's 3rd appearance at the festival after hosting his own stage in 2012. More recently he's gone on to play some of the biggest shows the scene has to offer, including a Nokia launch in Times Square, New York, alongside Nicki Minaj in New York.
About Brownstock Festival
Brownstock Festival is a Music Festival run by the Brown family on their farm in Essex. Now in its 9th year the festival is set to welcome 6000 visitors through the gates in September.  The festival is still completely independent and run entirely by the Brown family giving it a uniquely rustic and handmade feel.
Beyond the main stage and dance tent the Essex festival is also scattered with themed areas hand built or handpicked by the Brown family. There are a total of 7 music venues at the event and 20 festival areas. Acts will take to the Treehouse Stage, hand built by Farmer's Daughter Anna Brown, up in one of the old oak trees in the festival field. The family had over a 1000 bands apply to play. All were listened to personally by the brown family and 5000 festival goers also voted for their favourite.
Visitors can expect comedy shows, a Saloon Bar with country music and entertainments, a piano bar with burlesque dance, cabaret shows, quizzes, comfy sofas and the Brownstock big sing, an art camp, a skateboarding park, parkour and street dance displays and a host of other festival entertainments.
One of the highlights of the weekend is the chance to try home raised Aberdeen Angus Beef from the farm in the festival's pop up restaurant which will be serving "Brownstock Sunday Roast".