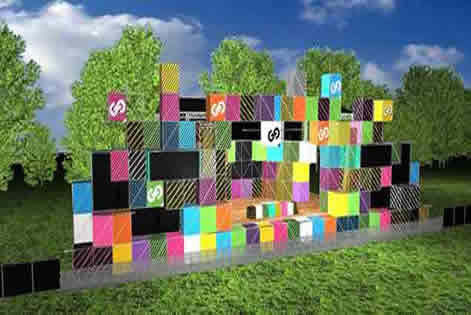 With just over a month to go, GlobalGathering are pleased to announce the first of the brand new onsite production making it's debut and completely transforming the festival site this summer.

The all new main stage and second stage will bring this year's colourful artwork concept to life with all new visuals, graphics and effects to boot.
Bringing inspiration from the international festival circuit, creative production company 250K, known for their outlandish staging and installations for the Armin Only World Tour, Extrema Outdoor, A State Of Trance and Lowlands, will be creating the two massive structures for the festival this summer.
The main stage, composed of over 200 colourful boxes; will play host to some of the biggest acts on the bill including performances from Pendulum, Tinie Tempah, Axwell, Steve Angello and Professor Green to name a few. The second stage is set to be hosted by Toolroom Knights and Union across the weekend making a fantastic new addition to the site with raised dancefloor platforms, lighting and amazing structures.

Global Gathering, 50,000 revellers gather to involve themselves in what could be said as one of the best dance music festivals in europe!