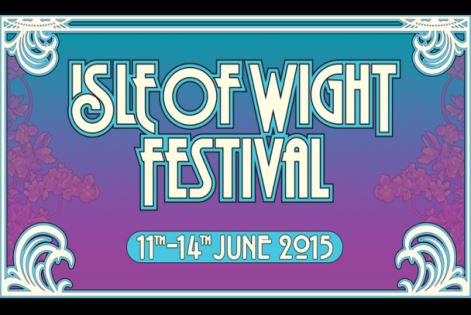 Groove Armada, Chicks on Speed, Coasts plus many more acts confirmed for Isle Of Wight festival 2015.

As the first month of the year draws to a close, the first festival of the summer The Isle of Wight Festival today reveals a whopping eighteen brand new acts!

Groove Armada, Chicks on Speed, Coasts, Ruen Brothers, Pretty Vicious and Visconti & Woodmansey with Glenn Gregory are all confirmed to perform over the weekend of 11-14 June, alongside a host of exciting acts who will play on The Garden Stage including James Walsh, Tim Arnold and Ben Montague.
These new acts join a tremendous line up including Fleetwood Mac, The Prodigy, The Black Keys, Paolo Nutini and much more to ensure there is something for all music tastes!
Recently named the fifth most popular festival in the world by viagogo, and the ONLY UK music festival included in the most-searched festivals of 2015, The Isle of Wight Festival, now in its 14th year, is one of the crown jewels of the British summer calendar, with a unique festival experience for music fans of all ages to enjoy. The festival offers 12 stages of live music over the weekend – including Main Stage headliners, acoustic sets, DJ performances and up-and-coming talent - alongside a huge variety of additional entertainment and activities such as the Bohemian Woods, Intoxicated Tea Rooms and Hipshaker, to escape from everyday life for that one weekend in June. Summer starts at the legendary Isle of Wight Festival, all the biggest names in music, one unmissable weekend: Be There.
Electronic music duo Groove Armada, composed of Andy Cato and Tom Findlay, first achieved success with the club classic ‘I See You Baby’ which they followed with four albums in the UK Top 50. Bringing elements of electronica, trip hop, house and dance together the two-piece promise to be a seriously exciting live affair with their DJ set on the island this year.
Music and fine art ensemble Chicks On Speed will be taking to the stage to deliver their innovative perspective on the current impressive collision between analog and digital worlds. Lying at the cutting edge of activism and media pop art, the band formed in Munich in 1997. Now with seven albums under their belt, which have all received rave reviews, Chicks On Speed promise to bring something different and interesting to the festival line up.
New up & coming band Coasts recently performed at Zane Lowe’s Future Festival on Radio 1 and are tipped for big things in 2015. Their buzzy choruses stick in your head for hours and with their memorable tracks leaving a lasting impression on crowds: Coasts are definitely ones to watch this year.
Siblings Henry and Rupert Stansall make up the rockabilly duo Ruen Brothers. Their guitars twang, their drums bash and their vocals take you back to a time of ton-up boys sporting leather jackets and quiffs on cafe racers. Making ‘60s flavoured beat pop with rockabilly rhythms, plus lyrics referencing Frankie Valli and better times, these two brothers are something special that should not to be missed.
Welsh boys Pretty Vicious are currently cementing their status as the next big thing in rock ’n’ roll. The lads recently recorded a session at the legendary Maida Vale studios for Radio 1’s Huw Stephens and have been tipped by the Manics’ Nicky Wire too. After playing their debut gigs in Merthyr the band were put on the Radio 1 playlist, seeing their single ‘Cave Song’ played every day for a week on the national station.
Legendary David Bowie producer Tony Visconti has teamed up with Woody Woodmansey and Glenn Gregory as Visconti and Woodmansey with Glenn Gregory  - this year’s Isle of Wight Festival marks the first time Tony and Woody have shared a stage since 1971, and the show will see a performance of Bowie’s seminal 1970 album ‘The Man Who Sold The World’, plus other classic Bowie songs.
Offering the chance to see artists in a unique and intimate environment is this year’s The Garden Stage. Performers will include James Walsh (frontman of Starsailor) as well as Tim Arnold who has recently been campaigning to save London’s Soho, as well as multi instrumentalist
Ben Montague, plus Bethia Beadman, Claydon Connor, The Carnabys, Germein Sisters, Little Eye, Honey Ryder, The High Kings, King Eider and Pronghorn.
A full range of ticket, travel and camping / accommodation options are available for The Isle of Wight Festival from www.isleofwightfestival.com.

Published on 23 January 2015 by Wayne Feltham