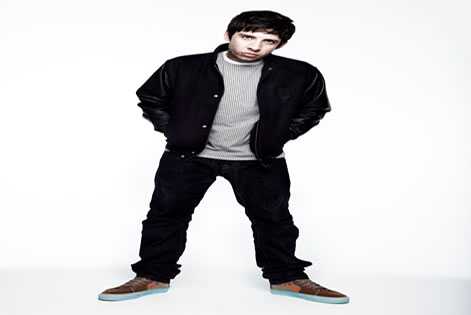 UK dance and hip-hop supremo Example will headline a show at the Eden Sessions on Saturday June 30.

Example, real name Elliot John Gleave, is fresh from the release of his third album Playing in the Shadows, which hit the top of the UK album charts in September last year. It followed 2010’s number four album Won’t Go Quietly and 2007 debut What We Made.
Example is best known for his chart-topping singles Changed the Way You Kiss Me and Stay Awake from his latest album. Won’t Go Quietly’s title track and Kickstarts, from the same record, hit the top ten. His collaboration with Wretch 32 on the Stone Roses-sampling Unorthodox peaked at number two in the UK singles chart.
Playing in the Shadows sees Example working with the industry’s top dance producers, including Chase and Status, Faithless and Nero. Example is currently working on an as yet untitled fourth studio album.
Devlin will be Example’s special guest at the Eden Sessions. The hip hop and grime artist’s debut album Bud, Sweat and Beers hit number 21 in the UK album chart and spawned Runaway, his most successful single so far. The song chronicles its protagonists’ escape from urban decay and their search “for the fruits from the lost garden of Eden”.
In 2010, Devlin was nominated in the Breakthrough Artist category of the Virgin Music Awards. He has revealed that he plans to release his second album this year.
Martin Williams, Eden’s Marketing Director, said: “This is another big coup for the Eden Sessions and this line-up is already looking like our best ever. Example has taken the best of the hip-hop, techno and house genres and created anthemic songs with killer pop choruses and huge appeal.
“In Devlin, we will be hosting one of the hottest young UK urban artists around. His debut record showed that he is at the forefront of the UK rap and grime scene and he proved with Runaway that he has the ability to write mature, catchy pop songs.”
Example and Devlin join UK soul and hip-hop star Plan B (Friday July 6) and Blink-182 (Sunday July 8 - SOLD OUT) on the bill for the Eden Sessions in 2012. More acts will be announced soon.
The Eden Sessions enter their eleventh year in 2012, following an acclaimed series of gigs in 2011, featuring Brandon Flowers and Pendulum among others. Previous years have seen performances from acts including Oasis, Kasabian, Mumford & Sons, Florence and the Machine and Muse.
Eden’s Inside Track scheme returns for the 2012 Eden Sessions. Members get a guaranteed pair of tickets to each show, with seven days to decide whether to buy them before they go on general sale. As well as priority booking and the latest Sessions news, Inside Track also gives members the chance to win exclusive Eden Sessions prizes.