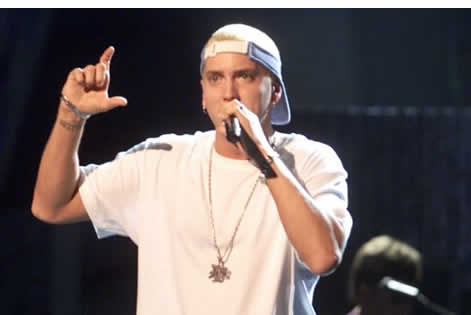 V Festival, sponsored by Virgin Media, delighted fans on the first day of the festival with stellar performances from headliners Artic Monkeys and Eminem across the dual sites of Hylands Park, Chelmsford and Weston Park, Staffordshire.

The Virgin Media Stage attracted thousands of fans to the likes of Arctic Monkeys telling the excited crowd ‘I bet you look good on the dance floor’ in Hylands Park, while Rihanna and Eminem gave electric performances in Staffordshire including a show stopping duet of ‘Love the way you lie’ where Rihanna wowed the crowd in a figure hugging black-cut out dress.
Rihanna’s raunchy moves, union jack crop top and hot-pants even helped her pull in a few celebrity admirers such as a starry-eyed Ellie Goulding and Greg James who watched her performance from the side of stage.
Professor Green and Katy B were just two of the acts who got The Arena stage pumping in Hylands Park, while Dionne Bromfield moved fans at Weston Park with a rendition of ‘Mamma Said’ in dedication to the late Amy Winehouse.
Meanwhile on the 4Music Stage Jessie J didn’t let her cast hold her back as she whipped up hysteria. After being piggy-backed onto the stage in a glittering rainbow leotard she introduced mini Jessie J to the crowds, whilst Dizzee Rascal sent the crowd ‘Bonkers’ with his eclectic line-up of favourite tracks.
The occasionally patchy weather may have dampened the festival fields, but not festival spirits, with welly boots a sight as common as sunglasses, with KT Tunstall cheekily challenging the Hyland’s crowd to a wet t-shirt competition.
The action wasn’t restricted to the stages either, with a definite sense of festivities in the air for celebrities. Michelle Kegan and The Wanted’s Max George were spotted looking cosy together, while Wayne Bridge was seen getting into the festival spirit giving his girlfriend, Frankie from The Saturdays, a piggy back in the artist area. Coleen Rooney was so eager to arrive she turned up with her hair in rollers before promptly tucking into a burger for lunch in VIP.
And if additional performances by the likes of Professor Green, Plan B, Primal Scream, Calvin Harris and Chase and Status wasn’t enough to satisfy festival-goers, the brand-spanking new Glee Club Comedy stage played host to leading comedians such as Kevin Bridges and Stephen K Amos.