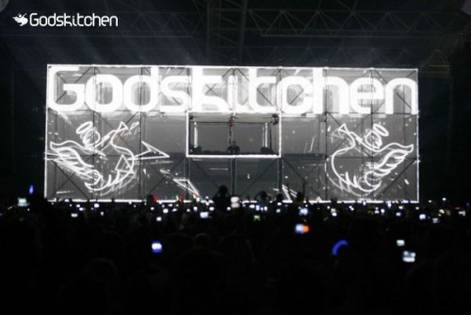 Godskitchen is set to make an epic return to the dance capital of the world, Ibiza for two jaw dropping audio visual nights in July.

The summer of 2001 was named The Summer of Godskitchen in Ibiza by dance music fans, with a season of road block sell out shows with residents like Tiesto, Picotto and Fergie.

Following this residency Godskitchen embarked on a global tour which has run for more than 10 years with overwhelming success visiting Australia, Malaysia, Croatia, South Africa, Taiwan, USA, Russia, Belarus, Poland, Slovenia, Mexico, Canada, Indonesia, Turkey, Argentina, Ukraine and many more locations, most recently partying with over 180,000 people in 22 countries at 28 events, in 2010 alone.

Now after a decade of touring world wide that has positioned the brand as one of the biggest dance music institutions in the world, the international clubbing super power brings the Godskitchen Boombox to the Balearics, finding a new home at Privilege, the worlds biggest club and the only club venue that is capable of hosting the massive production.

As for the DJ’s, Godskitchen Boombox regular Sander Van Doorn steps up to headline both shows.

Some people call Sander a technical & musical genius. And who can deny it? He has cranked out more dance floor destroyers, sold-out gigs, number one records, and awards than most artists do in a lifetime, defying categorization he brings his unique blend of electronic music styles to the awesome Boombox this summer.

Joining Sander on both dates will be Egypt’s new generation trance stars Aly & Fila who will bring their euphoric, uplifting trance sounds to the Godskitchen Boombox for the first time.

Wednesday 20 July also features Italian electro house superstar Alex Gaudino who is currently riding high with his smash hit “What A Feeling’ featuring Kelly Rowland, and completing the line up will be Holland’s ‘In Search of Sunrise’ mix complier Richard Durand who’s unique blend of tech trance and electro has made him a firm favourite in Ibiza over recent years.

The combination of the Godskitchen Boombox, a diverse line up of quality artistes & Privilege, the biggest club in the world, is set to rock Ibiza this summer.

It would be criminal to miss this epic event