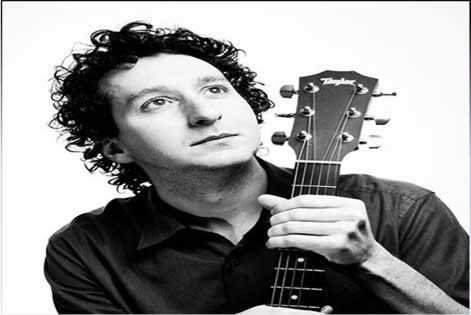 Somerset festivalgoers will be the first to hear songs from the exciting new solo artist’s album Songs to Scythe Back the Overgrown, weeks ahead of its official release on March 1.

The Manchester-based artist carved himself a name in a duo with fiddler Tom Kitching, a former BBC Radio 2 Young Folk Awards nominee. The twosome, who met at Loughborough University, proved popular, quickly gaining a following and a foothold on the festival and folk club circuit. But Gren is now striking out solo, finally tapping into his rich and prolific song writing reserves and effortlessly bridging the Atlantic divide with an acoustic spectrum ranging from English folk to moody American blues.

A polished recording it features clear, driving rhythms and poetic lyrics shaping a myriad musical landscape of people and places. Guest musicians include the in-demand Katriona Gilmore (fiddle and backing vocals) and Nottingham’s celebrated Andy Whittle on keyboards and harmonica.

Says Gren: “The album is inspired by old English tunes, early American blues ballads and verses that thrive somewhere in between.” It ranges from the catchy, free-flowing late night trawl through a Midlands town Kings and Queens to the dark, unflinching and gutsy blues showstopper My Time is Nearly Over, a song inspired by the prison blues songs of the Mississippi State Penitentiary, Parchman Farm.

Award-winning Irish songstress Cara Dillon is the festival’s patron. She and her musician husband, Sam Lakeman, have made Frome their home.  Says Cara: "I can't express how thrilled I was to be asked to be patron to Frome Folk Festival. Frome has been my adopted home since 2002  and it's no secret to us locals that Frome has an incredible array of arts, music and theatre and some hugely talented people and it's long been a wish of mine to see a dedicated folk festival in the town-. well now we do!”

Popular entertainment centre The Cheese and Grain will stage the main action, with numerous other town venues and pubs hosting live music sessions.

“Folk legend” Steve Knightley has been revealed as the Sunday headliner. The Show of Hands’ inspired frontman, hailed as one of England’s finest songwriters, will next year celebrate 20 years of his phenomenal partnership with multi instrumental wizard Phil Beer when Show of Hands play the Royal Albert Hall for an incredible fourth time.

Saturday’s headliners are the melodeon, fiddle and singing phenomenon John Spiers and Jon Boden , the musicians who spawned the mighty superband Bellowhead and twice winners of Best Duo at the BBC Radio 2 Folk Awards. The duo will stage a rare ceilidh in addition to their main stage appearance.

Published on 20 December 2011 by Wayne Feltham