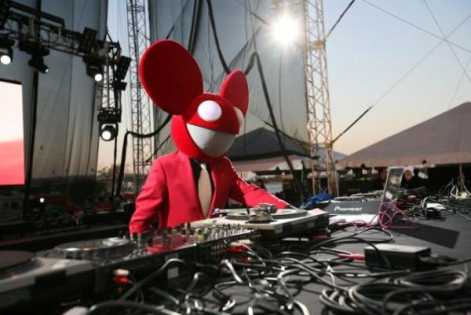 Barclaycard Wireless Festival has announced a host of amazing new acts set to join the weekend line-up.  Afrojack, The Roots, Santigold, Rita Ora and Lloyd are amongst those confirmed to join headliners Deadmau5, Drake and Rihanna.  Day tickets for Sunday 8 July, headlined by Rihanna, have already sold out whilst tickets for Friday 6 and Saturday 7 are selling fast.  This year is set to be the biggest and best selling Barclaycard Wireless Festival yet!
Afrojack, The Roots, Metric, Santigold and Zeds Dead join an already enviable line up on Friday 6 July, headlined by Grammy-nominated dance maestro deadmau5.  Dutch music producer Afrojack first burst onto the scene with the 2010 smash ‘Take Over Control’.  He became a mainstream chart-topping force when he teamed up with Pitbull, Ne-Yo and Nayer for last year’s ‘Give Me Everything’ and 2011 saw him placed in the top ten of DJ Mags top 100 DJ’s of the year.  Philadelphian neo soul band The Roots have become one of the most respected acts around, with four Grammys under their belt.  Their live shows are known for being among the best in the business and their set at Barclaycard Wireless Festival will not disappoint.  Toronto-based quartet Metric also join Friday’s line-up, their self-released album ‘Fantasties’ sold over a million albums worldwide.  The band have picked up two JUNO awards and also wrote the theme song for the Grammy nominated and Academy shortlisted Twilight: Eclipse soundtrack.  Brooklyn’s Santigold is a unique and inspiring figure on today’s musical landscape. Her 2008 eponymous album established her internationally as one of the most exciting and fearless artists to emerge in the last decade. Her eagerly anticipated new album ‘Master of My Make Believe’ will be out later this year.  Toronto electric duo Zeds Dead have earned an excellent reputation amongst a new generation of producers with their unique brand ofdance-floor classics.
Rita Ora, Hilltop Hoods, Koan Sound and AlunaGeorge are confirmed to join the Barclaycard Wireless Festival line up on Saturday 7 July, headlined by Drake.  Roc Nation’s newest signee and British it girl Rita Ora is making waves on the global music scene. Her tremendous vocal ability and fresh take on music have earned her respect and interest from heavy-weights Will.I.Am, Drake and Kanye West, all of whom are working with her on her debut album.  She recently featured on DJ Fresh’s numberone single ‘Hot Right Now’ and is soon to release her own single ‘R.I.P.’, which features Tinie Tempah.  Aria Award winning Australian group The Hilltop Hoods have earned themselves a place at the very forefront of the Australian music industry, repeatedly singled out as one of Australia’s hottest live acts by media, industry insiders and fans alike, the Barclaycard Wireless Festival audience are set for a real treat.  Hailing from Bristol, duo KOAN Sound released their first extended single, the ‘Max Out EP’ in early 2011. Later in the year the group unveiled their biggest release to date, the ‘Funk Blaster EP’ on Skrillex’s OWSLA imprint.  The duo rounded off 2011 with the ‘Best Breakthrough Artist’ at the Dubstep Music Awards.  Also joining Saturday’s line up are hotly tipped AlunaGeorge.  Taking the boom and glitch of British bass culture and allying it to the slick sweetness of classic American R&B, singer Aluna Francis and producer George Reid have captured the attention of futuristic pop heads across the blogosphere.
Lloyd, Far East Movement, Doctor P and Kreayshawn join Sunday’s bill, headlined by superstar Rihanna.  R&B recording artist Lloyd released his solo debut single ‘Southside’ in 2004, his fourth studio album ‘King of Hearts’ was released last year, it featured the massive hit single ‘Dedication To My Ex (Miss That)’ (featuring Andre 3000 and Lil Wayne) which went top 5 on the UK singles chart.  LA-based quartet Far East Movement made their major label debut in 2010 with the release of ‘Like A G6’ which topped the US singles chart. They have gone on to collaborate with the likes of Snoop Dogg and Justin Bieber, new album ‘Dirty Bass’ is out later this year.  English producer Doctor P and Californian rapper Kreayshawn also join Sunday’s sensational sold out bill which along with Rihanna features the likes of Jessie J, Calvin Harris, J Cole and Rizzle Kicks.