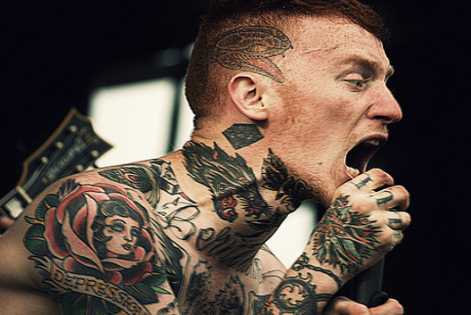 Also making their live debuts outside of London are The Internet, the latest project from the creative hot house that is OFWGKTA and an incredible new psychedelic band created by key members of Tame Impala..

With just over two weeks to go until this year’s shows, Dot To Dot can announce the phenomenal news that Pure Love, Frank Carter’s much anticipated new musical project, has been added to the already staggering bill. Lead by the erstwhile Gallows frontman, along with guitarist Jim Carroll (ex-Hope Conspiracy), Pure Love has rightfully been met with unanimous praise after unveiling anthemic new track ‘Bury My Bones’ recently. Pure Love are guaranteed to be a riot live, and should definitely be on your list of bands to see at Dot To Dot. The band’s debut album, produced by Gil Norton is out later this year and if Bury My Bones is anything to go by, their set will go down a storm at Dot To Dot.
Also making their live debuts outside of London are The Internet, the latest project from the creative hot house that is OFWGKTA and an incredible new psychedelic band created by key members of Tame Impala, Pond who will both join Pure Love in venturing into uncharted territory. Reinforcing Dot To Dot’s reputation for propelling exciting new talent, these three acts will set Dot To Dot alight with their innovative and original music that is guaranteed to draw the crowds. And that’s not all, as Dot To Dot will be the first opportunity for festival-goers to see self-proclaimed wizard, Willis Earl Beal, whose soulful voice is a wonder to behold, as he makes his first run of dates around the UK. Plus the mighty Dog is Dead and Jake Bugg both mark triumphant homecomings with their biggest Nottingham shows to date. And we can also confirm that Friends will now be playing the Bristol leg of Dot To Dot in addition to the previously announced Nottingham show! With tickets priced at just £20 Dot To Dot is undoubtedly one of the must-see events of the year.
There will be more acts and competitions plus venue news in the build up to Dot To Dot, so keep an eye out