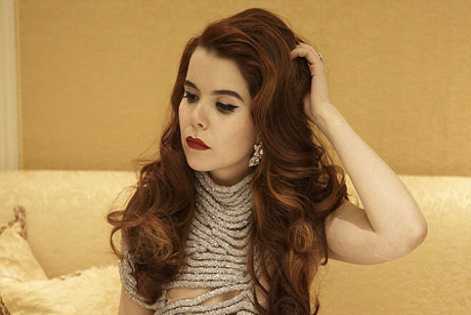 Setting a great soundtrack for this summer, Larmer Tree Festival is ecstatic to announce kooky British singer-songwriter and actress, Paloma Faith will ‘Put a Spell’ on Thursday night with her extraordinary, theatrical flair.  Headlining the Main Stage, the Stone Cold Sober siren looks set to brighten what will already be a carnival atmosphere.
Making her international breakthrough in 2009, this former burlesque dancer, musician’s assistant and Best British Female Brit Award nominee, will soon be seen helping Danny O’Donoghue mentor his acts on BBC 1’s The Voice UK.  At Larmer Tree she will be belting out hits from her critically acclaimed debut album Do You Want the Truth or Something Beautiful?, as well as treating festival-goers to material from her eagerly awaited second album Fall To Grace.  Out this May, it’s being billed as the soundtrack to her life, with a union of Paloma’s first two loves: film and music.  Backed by spectacular strings and gospel singers, the first track from this album, Picking Up The Pieces is released next month.
Renowned for her unique fashion, which often verges on the extreme, the Larmer Tree Festival audience will have to wait until July to see Paloma’s extravagant attire and show stopping performance, perhaps she’ll even sport a huge feature plume!
James Shepard, Founder and Co-Director of Larmer Tree Festival said:  “There’s definitely going to be a buzzing theatrical feel to Thursday night, with comedy headliner Tim Minchin rocking with his unique blend of musical comedy, followed by Paloma’s distinctive, dramatic performance.  This year’s festival looks set to be our best yet!”
Paloma joins a diverse bill of music headliners including Jools Holland and special guest former Fine Young Cannibals frontman Roland Gift on Wednesday, Levellers on Friday and musical superstars Amadou & Mariam on Saturday.  Plus there’s also the suspense of Sunday’s headliner still to be revealed!  Newly confirmed music acts are Punch Brothers, Swing Zazou, Trio Tekke, Smerins Anti-Social Club, The Regular Joes, Thomas Ford, Vid Warren, Fearne, The Wishbones, Morning Rush and DJ George Smerin.
With Tim Minchin headlining this year’s comedy line-up and the likes of The Inbetweeners’ Greg Davies heading-up the hilarious humour in the ARC on Thursday, the magnificent Larmer Tree Gardens are also set to come alight with laughter!
Audience members can also look forward to an exciting new element to this year’s event, Larmer Tree Festival has teamed up with the fantastic Songs from the Shed to capture artists performing raw acoustic sessions in the intimate setting of a garden shed.  By special invitation only, a small, select number of festival-goers will have a unique opportunity to sneak away from the main festival and experience one of these secret performances.
Audience members will have chances to win golden tickets to these special sessions in the lead up to the festival.  Lucky winners will have to wait to find out which artist they’ll see… maybe a yet undiscovered talent or a brilliant headliner!
Complementing the great music and comedy line-up, there’s also a bursting programme of entertainment from colourful street theatre to exciting shows and workshops for the whole family to enjoy.