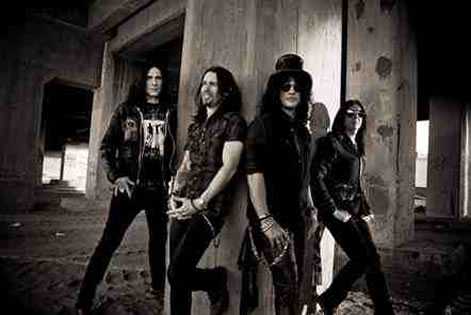 SLASH--the iconic, Grammy-winning rock guitarist and songwriter--has revealed the cover artwork and album title for his second studio album APOCALYPTIC LOVE. Due out May 21 (in the UK)

The new album features Myles Kennedy and The Conspirators and will be released SLASH’s own label DikHayd International and distributed through Roadrunner Records in Europe, Middle East, and Africa.
In the UK, the album will be released on May 21 in exclusive Classic Rock Fan Pack form – providing a unique collectable package containing the studio album with bonus tracks alongside a specially created magazine with unseen behind-the-scenes content put together by Classic Rock. The Fan Pack format will also come with free gifts including a pin badge & artwork poster and will be available to buy via more than 2000 retail outlets on newsstands nationally as well as the traditional high street and online music retailer. The Fan Pack is available for pre-order now at www.myfavouritemagazines.co.uk/slash-fan-pack. Roadrunner Records will simultaneously release the record digitally. The standard physical release of the Slash album will follow through Roadrunner Records on June 18 2012.
SLASH is currently in a Los Angeles studio putting the final touches on APOCALYPTIC LOVE. This week he announced his headlining U.S. tour will begin May 3 inBaltimore. A fan pre-sale is happening now on www.slashonline.com,the regular on-sale starts tomorrow, Friday, February 17. See the full itinerary below which more dates to be added.
APOCALYPTIC LOVE, will follow his 2010 debut album Slash (Also released in Fan Pack format and which has now sold over 100,000 copies in the UK alone) and his November2011 first-ever live  solo album, the two-CD/DVD set Made In Stoke 24/7/11. Notably, the Slashalbum debuted on the Billboard Top 200 chart at #3(#1 on the Rock chart, #1 on the Independent chart, and #1 on the Hard Music chart). Digitally, the album also became the #1 overall digital album and hit #1 on iTunes in 13 countries. Internationally, the disc achieved Top 5 chart positions in over a dozen major territories, hitting #1 in both Japan and New Zealand.
On APOCALYPTIC LOVE,SLASH--along with and his bandmatesMyles Kennedy (vocals), Brent Fitz (drums) and Todd Kerns (bass)--have teamed with producer Eric Valentine, who also produced the Slash disc. All the songs were written together by SLASH and Kennedy andcameras have been rolling throughout the entire making of the album. Check out exclusive behind-the-scenes footage airing weekly:

After leaving the band, Slash went on to critical acclaim in his personal project Slash’s Snakepit, and global success with the supergroup Velvet Revolver.  He has been widely sought after by the biggest musicians of all time, performing with everyone from Michael Jackson to Stevie Wonder to Ray Charles.  Slash recently landed on the top of the charts with his first true solo album, Slash.  In addition, Slash was honored by the Hollywood Chamber of Commerce who named him as an official selection for 2011 to receive a star on Hollywood’s iconic Walk of Fame. In February 2011, he performed at the Super Bowl XLV half time show, seen by more than 106 million people, becoming the most-watched program in U.S. television history (Nielsen Co.).

Published on 17 February 2012 by Wayne Feltham