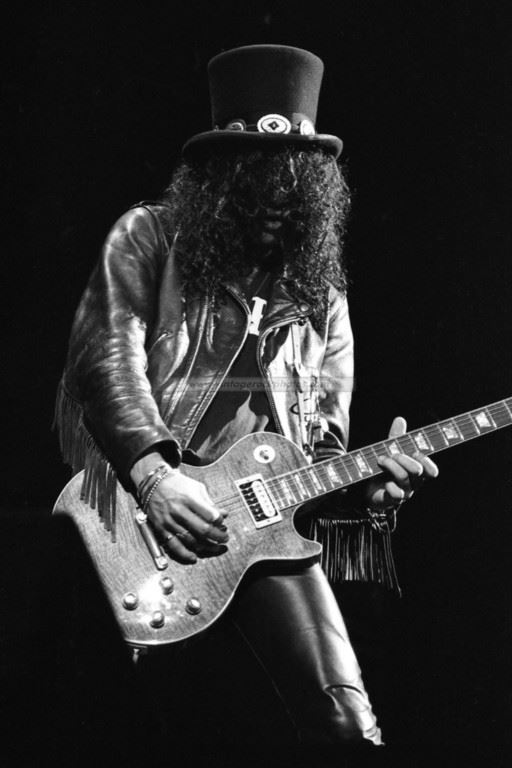 Saul Hudson (born 23 July 1965, Stoke, England), better known by his stage name Slash, is a British-American musician. He is the former lead guitarist of the American hard rock band Guns N' Roses, with whom he performed and recorded between 1985 and 1996. He later formed Slash's Snakepit and co-founded Velvet Revolver with his former bandmates Duff McKagan and Matt Sorum; and his debut solo album, Slash , was released in April 2010. In 2011 he wrote and featured on kick it Up a Notch, the end credit song for The Disney Channel Original Movie Phineas and Ferb: Across the 2nd Dimension. (Kick It Up a Notch Songfacts). He has written a self titled autobiography which was put to print in 2007.
Slash joined his first band, Tidus Sloan, in 1981. In 1983, he formed the band Road Crew—named for the Motörhead song "(We Are) The Road Crew"—with his childhood friend Steven Adler, who by then had learned to play drums. He placed an advertisement in a newspaper looking for a bassist, and received a response from Duff McKagan. They auditioned a number of singers, including one-time Black Flag vocalist Ron Reyes, and worked on material that included the main riff of what would become the Guns N' Roses song "Rocket Queen." Slash disbanded the group the following year due to them not being able to find a singer, as well as Adler's lack of work ethic compared to himself and McKagan. He, along with Adler, then joined a local band known as Hollywood Rose, which featured singer Axl Rose and guitarist Izzy Stradlin. Following his time with Hollywood Rose, Slash played in a band called Black Sheep and unsuccessfully auditioned for Poison, a glam metal band that he would later openly deride.
In June 1985, Slash was asked by Axl Rose and Izzy Stradlin to join the newly founded Guns "N' Roses. Duff McKagan and Steven Adler completed the line-up. They played nightclubs—such as the Whisky a Go Go, The Roxy, and The Troubadour—and opened for larger acts throughout 1985 and 1986. It was during this period that the band wrote most of its classic material, including "Welcome to the Jungle," "Sweet Child o' Mine," and "Paradise City," As a result of their rowdy and rebellious behavior, Guns N' Roses quickly received the moniker "Most Dangerous Band in the World," causing Slash to remark, "For some strange reason, Guns N' Roses is like the catalyst for controversy, even before we had any kind of record deal."
Slash has received critical recognition as a guitarist. In August 2009, Time Magazine ranked him #2 on its list of the "10 Best Electric Guitar Players of All-Time". He was also ranked #21 on Gigwise's list of the "50 Greatest Guitarists Ever".
Slash was the first musician to own a signature amplifier created by Marshall for him. In 1996 the Marshall Slash JCM 2555SL was launched, it was built with the specs of Slash's own original 1987 Marshall Silver Jubilee 2555 amplifier. A total of 3000 of these amplifiers were made before it was discontinued.
On his self titled album,"Slash" he has worked with many artists like Ozzy Osbourne, Fergie (Black Eyed Peas), Myles Kennedy (Alter Bridge), Kid Rock and Ian Astbury (The Cult). The singles released from the album are "Sahara","Back From Cali","By the Sword" and "Beautiful Dangerous".