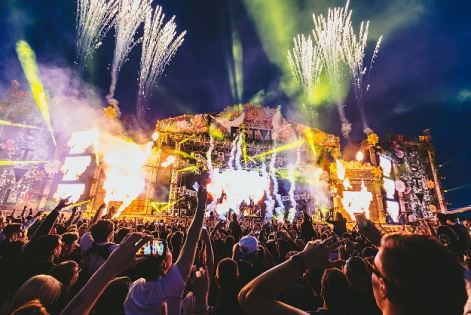 We Are FSTVL have curated a line-up that firmly positions the event at the very heart of the international festival circuit and paves the way for their biggest year to date.

Having made a spectacular sell-out debut in 2013, award-winning We Are FSTVL has seen a rapid rise in the space of just two years. After doubling in size in their second year following unparalleled levels of demand, We Are FSTVL has since broken through in a massive way and now attracts crowds of 50,000 from across the UK and Europe. Returning to the ‘Field of Dreams’ in Upminster, Essex for the third year running on 30th and 31st May 2015, We Are FSTVL have curated a line-up that firmly positions the event at the very heart of the international festival circuit and paves the way for their biggest year to date.

The first to grace the festival’s main stage is dance music mainstay Carl Cox.  Taking the reins from the likes of Disclosure and Fatboy Slim, Carl’s debut We Are FSTVL performance will be packed full of Ibiza spirit,  whilst Seth  Troxler  is  also  set  to  unleash  his  universally  recognised brand  of  techno  on  the Upminster crowd. Grammy nominated producer Nic Fanciulli is set to share his driving strain of house and techno, with the larger than life force of Solomun also set to cause a stir.In-demand producers Gorgon City and Hot Since 82 will also feature, joined by Anglo-American Second City and BBC Radio 1 tastemaker Monki.

Heading  up  Saturday’s  techno Warehouse  is Loco  Dice’s  Used  +  Abused  party,  whose  thundering brand of techno is sure to kick things off in style. Drumcode head Adam Beyer and Berlin-based duo Tale of Us will be on hand to deliver their atmospheric take on deep house and techno, with special guest Recondite providing a melodic live set of his own. Fuse-bossEnzo Siragusa also make his We Are FSTVL debuts, with Yaya set to round off the day’s proceedings.

The ‘What Hannah Wants’ takeover of Saturday’s Big Top Bass stage brings a selection of artists at the heart  of  the  UK’s  bustling  underground  scene.  Joining  Hannah  is  iconic  DJ and  one  half  of  ‘Can  U Dance’ Oneman, who’s set to perform alongside PMR signee T Williams and the duo who recently charted at #3 in the UK singles charts with their rework of R Kelly’s ‘Bump & Grind’ - Waze & Odyssey. Black  Butter’s My  Nu  Leng  and Kidnap  Kid  will  also  be  joining  ranks,  alongside  up-and-comers GotSome and the enigmatic Friend Within.

In  addition,  Saturday  will  see  legendary  duo Masters  At  Work  headline  the  Defected  In The House stage, Mark Knight providing a fitting climax to the Toolroom Live stage, and Tall Paul heading up the Clockwork Orange arena.

Returning to We Are FSTVL for the third year running are crowd favourites Cocoon, whose stage will be spearheaded  by  the  undisputed  king  of  techno Sven  Väth.  Joining  him  are  Cocoon  heroes Ilario Alicante and Ricardo  Villalobos, whilst Âme and Dixon will play an extended back-to-back set - a recent highlight of Fabric’s 15th Birthday weekend. To top this off Ten Walls, credited with producing one of the biggest tracks of last summer in ‘Walking with Elephants’, is also set to perform live.

Drum  &  Bass  stalwarts  Hospital Records  will  also call the  shots at We Are  FSTVL’s  ‘Big  Top Bass’ arena. Boasting one of the largest line-ups at the festival, the label will be out in force to showcase the likes of Camo & Crooked, Logistics b2b Nu:Tone, Lynx, Fred V & Grafix and Etherwood. Special guests will also include garage legends DJ EZ & MJ Cole, as well as the joyful Toyboy & Robin, all supported by three of the leading MCs on the circuit; Lowqui, Wrec & Dynamite MC.

Elsewhere on Sunday, Jamie Jones, Marco Carola and Claude VonStroke head up a stacked billing in the Paradise arena, with MK hosting a showcase of his very own Area 10 brand and Camelphat bringing endless vibes to the Paravana stage.

With over 200 artists playing across 12 arenas of music, We Are FSTVL 2015 will be an unmissable fixture in this year’s festival season.