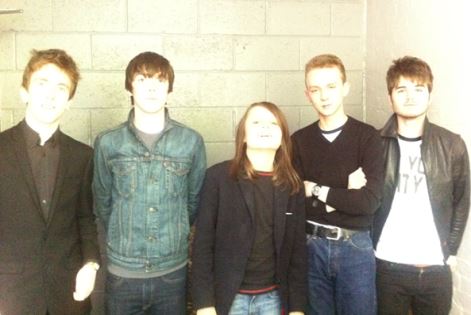 Our very own Ned Dylan sits down with The Strypes for a pre-gig chat and explains why they are the most exciting act of Summer 2015.

Its 5:15. I’m meant to be at a family wedding at the other side of town but I’m sat in the Strypes’ dressing room.

“Thanks for the exposure.” They tell me – not they need it. They’re undoubtedly the coolest Rock ‘n’ Roll band right now. Not because of their army of famous faces but because of their cut-the-crap approach; straight-up live set full of newly self-penned songs; non-existent egos; and the style they carry around through everything from their classic clothes to their natural charisma.

Last year, they were the talk of every radio show, magazine and the blogosphere. However, all people seemed to ask them about was their age. “It was annoying, incredibly so. Every time you complained people would say ‘buck up lads, everyone has questions they hate being asked.’”

One direction with guitars? I barter. Referencing their Soccer Am Appearance. “They started asking us about football!” exclaims Evan, as if being asked about football on a football show was surprising. “I hate football!”

“[We hate] silly boyband questions. We’re also very anti how did you guys first meet? They ask that in every single interview ever and it’s always the same boring answer.” Exiting rant, Evan adds “Is that the next question?”

Recently the band were the subject of legendary, cult film director Julian Temples, which is more than a seal of approval. The film suitably entitled ‘Best Thing Since Cavan’ premiered on BBC4 last month. “He [Julian Temples] was just fantastic. We’re a big fan of a lot of his films”, they excitedly tell me. “Evan’s Dad’s been filming us since we were kids, so there’s always been footage of us playing.”

The band’s first gig is even featured in the film but they weren’t embarrassed about it being included. “You can’t change it so you might as well be proud of it. We enjoyed going ‘that’s hilarious! Look at how bad we were.’ Everyone in England must have been going ‘and we thought they were bad…’”

Despite selling out nearly every venue on their new Flat Out Tour, many dates being so popular that venue upgrades have been required, The Strypes are still struggling to get airplay for their new single Scumbag City Blues, which to me is up there as the band’s best track yet and is a slightly different direction than what was seen in their charting 2013 debut Snapshot. “We don’t get played much anywhere… …We can still do gigs and tour successfully. If we get played on the radio then cool man, but it’s not anyone’s aim.” Later that night, it became clear that the lack of airplay hasn’t affected the band as the whole full-capacity venue was singing along to the Scumbag City Blues chorus as if it was a nostalgic classic.

Scumbag City Blues is just one of the many gems that have come out of the band song-writing, after originally filling their set up by paying homage to their classic blues influences with covers. “There was always a natural interest but initially, the only reason why we started writing was because when we started gigging in Dublin, it was all fun for us, we just started playing and got all this interest. But then we had all these old, Dublin bands saying ‘they shouldn’t be onstage with us because we write our own songs!’ But it is a rewarding experience if you write a song you like, it’s a good thing to do.”

The Strypes’ summer dates are not-to-be-missed, if the Roadmender gig was anything to go by. It is also around that time they’re expecting to drop the album, in their words “on the floor.”

“We’re doing a festival in Spain where the bill’s us Johnny Marr and then Sting.”

The band, although fresh-faced, are no festival novices. “A couple of years ago, doing Glastonbury was highlight for me. Being on the John Peel stage was just fantastic.”

Who knows maybe they’ll be back at Glasto this year? But with a summer including T in The Park, Boardmasters (and more that they told me not to tell you about!), please forget what the NME told you, The Strypes are the true most exciting band of the summer. It’s official – I said so.