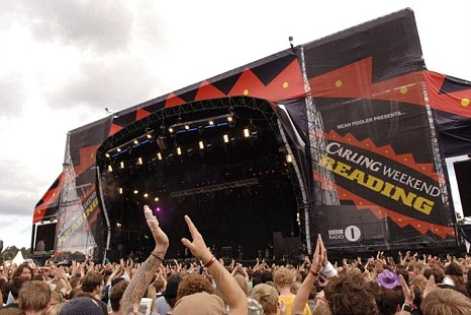 Summer’s kicking in and the countdown to READING & LEEDS FESTIVAL has hit the 100 days mark so it’s time to start planning the most rock and roll weekend of the year.

With exclusive appearances from THE CURE, KASABIAN and FOO FIGHTERS on the Main Stage and hundreds of other artists set to appear, this is the only place for music fans to spend the August Bank Holiday weekend.

Other acts confirmed to appear include PARAMORE, FLORENCE AND THE MACHINE, THE BLACK KEYS, THE MACCABEES, JUSTICE, AT THE DRIVE IN, METRONOMY, LESS THAN JAKE and SOCIAL DISTORTION with many more names yet to be announced over seven stages.

The festival takes place at Little John’s Farm in Reading and Bramham Park in Leeds where 160,000 music fans spend the best weekend of the year listening to the greatest line-up of rock, indie, metal, punk and dance music.

• There is a competition running online at www.readingfestival.com and www.leedsfestival.com where you can win the chance to become the Lord or Lady Mayor of the festival. Your ticket will be upgraded to VIP; you can watch your favourite band from the side of the stage, have a backstage slap up lunch and much, much more.

• Reading & Leeds actively operate and promote deposit schemes for cups and water bottles, facilitating the collection of recyclable waste and ensuring we achieve the highest rate of recycling. A 10p deposit is taken for each cup which is refundable if the cup is taken back to the refund points.

• When the bands stop the fun doesn’t – at Reading & Leeds films are show in the cinema tent till late and there is dancing in the Silent Arena at both sites where you can disco dance till dawn, plus late night entertainment to be announced at the Alternative Stage in Leeds including DJ’s, interactive films and much more.

• Relentless will bring the new look Energy Sessions Arena, sponsored by Relentless Energy Drink, to the campsite at Leeds each night from 10pm to 3am - a massive outdoor stage playing host to an array of not-to-be-missed DJ talent and delivering a unique experience for festival-goers.

• Jägermeister will be turning up to Leeds with their massive three story specially converted ex-military 25 tonne Ice Truck. The Ice Truck will be situated in the main arena and comes complete with a serving bar, dispensing Ice Cold Jäger shots from tap machines that chill the Jägermeister to zero degrees.

• River Island will be getting involved at Reading this year with a festival ‘Swap Shop’ – exchange your dirty festival clothes for some brand spanking new River Island kit, safe in the knowledge that you’re doing your bit for charity.  River Island will clean your dirty kit and donate it to Breakthrough Breast Cancer.  Check the festival website for details.

• Everybody who buys a weekend ticket gets a free burger and beer on the Friday, Saturday and Sunday of the festival, with vegetarian and soft drink options if preferred.  Don’t just stick to that though, this year there will be all the usual foody options available but also the likes of tapas, a full carvery and even ostrich!

• Reading & Leeds Festival is partnering with goCarShare. It's built around Facebook and connects festival-goers, so you can see if you have any friends or friends of friends, heading the same way. There is priority parking right by one of the site entrances for the first 200 cars to sign up, which means no time wasted looking for a space and a short walk to the campsite. All occupants of the car, passengers and driver, will be in with a chance to win a pair of tickets for either Reading or Leeds 2013. The goCarShare team will even wash your car for you! Full details and T&C’s on the Reading & Leeds websites.

• Azealia Banks released an eagerly awaited new track ‘Jumanji’ last week, taken from her debut album 'Broke With Expensive Taste’ due later this summer and Reading & Leeds are one of the only festivals to catch her at.

• Iceland’s Of Monsters And Men have never been to Reading & Leeds. They’ve said “We're really excited.  We've never played a UK festival, BUT we have played in London.  We expect sun but also a lot of rain. We're not afraid to get muddy!”

• The Joy Formidable make their only UK appearance of the summer at the festival. They have just completed work on their second album with legendary producer Andy Wallace (Nirvana, Jeff Buckley Rage Against The Machine), the follow up to their debut ‘The Big Roar’.  No doubt fans will get their first preview of the new tracks at Reading & Leeds.

• The Black Keys release a new single ‘Dead and Gone’ this month, taken from their hugely successful album ‘El Camino’.   Released to widespread critical acclaim in December, ‘El Camino’ debuted at # 2 on the Billboard Top 200 and has already been certified Platinum in Australia, Canada and New Zealand, and Gold in France, Ireland, the UK and US.

• Will Rees from the Mystery Jets was asked recently what he was looking forward to this summer – “Leeds (Festival).  They’ve got dodgems.” Whereas Ryan Jarman from The Cribs said “Reading is always my favourite ‘cos that’s the one I always used to go to when I was growing up, even when Leeds started.  I’ve been there every year since 1997.”

• Next weekend Foo Fighters will appear on the series finale of ‘Saturday Night Live’ in the US, hosted by none other than Mick Jagger.