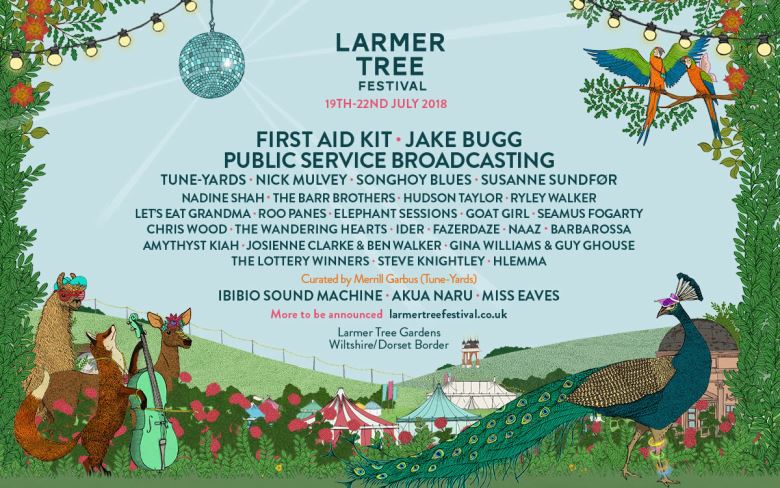 This year, Larmer Tree’s Main Stage will see a female-fronted takeover to mark the centenary of women’s suffrage.

Merrill’s curation extends across three stages and is a selection of some of her favourite female artists.

Speaking about the role of Guest Curator at Larmer Tree Festival, Merrill Garbus of Tune-Yards said:
“It's a great privilege to be involved in the curation of Larmer Tree's programming this year. I was happy to include women artists, all of whom I know from past projects and admire for their unique and brilliant voices, laser-focused on a future that is seldom represented in festival programming. I hope audiences will enjoy these artists as much as I do.”

The Larmer Tree Festival programme expands with the addition of many new names including Public Service Broadcasting, who will be returning to Larmer Tree for 2018. Expect samples galore along with their unique mix of archive footage, electronica and banjo which will educate, entertain and inform.

Also added to the programme will be Mercury-nominated Nick Mulvey. Mulvey has created a sound that is both striking and individual, channelling great musicians including Nick Drake, Joni Mitchell, and Tom Waits. Audiences can expect a variation of styles from this scholastically talented artist.

Dorset-raised singer-songwriter Roo Panes has also joined the line-up. Since releasing his debut album ‘Little Giant’ was released in 2014 to critical acclaim, Panes has racked up an impressive 35 million plays on Spotify.

Also joining the diverse programme is Noongar musician, Gina Williams. A Balladong daughter from the Noongar nation of Western Australia, Gina’s music is informed by an ancient Indigenous culture and merges evocative sounds, natural acoustic instruments and powerful storytelling. Plus, Larmer Tree will welcome Songhoy Blues for an energetic live show jam-packed with their own brand of blistering, compelling West African rock.

Set in the Victorian gardens in the beautiful landscapes of Cranborne Chase, Larmer Tree is nestled in an area of outstanding natural beauty on the border of Dorset and Wiltshire. 2018 will also see the exciting addition of the brand new Larmer Spa, where festival-goers will be able to blissfully retreat by day and into the evening with the help of indulgent hot tubs, a sauna yurt, and a cosy Bedouin chill out lounge complete with huge bean bags, rugs and throws all nestled deep in the woods.

There’s more to come from the Larmer Tree team with news on the comedy and music programme to be revealed.