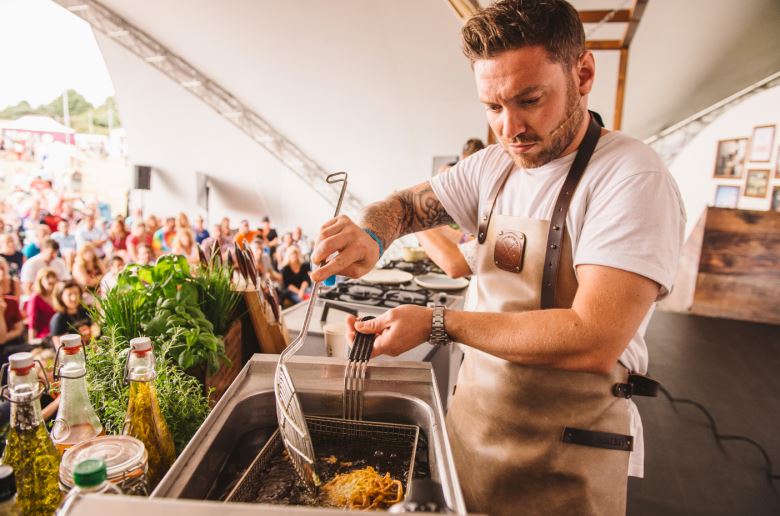 The Big Feastival, now in its sixth year, is back on Alex James' Farm with a jam-packed festival line-up for the August Bank Holiday weekend!

The Big Feastival, proudly presented by NEFF, is set to transform the Cotswolds this August Bank Holiday with its biggest and most delicious line-up yet. With incredible music, world-class chefs, award-winning street food and a packed programme of kids' entertainment, there really is something for everyone.

From start to finish visitors won’t want to miss a minute of The Big Feastival. Haçienda Classical will be getting the weekend off to an electrifying start with nostalgic dance songs accompanied by a full classical orchestra plus special guests Mike Pickering, Graeme Park, New Order’s Peter Hook and Happy Mondays’ Shaun Ryder and Rowetta on the night. Pop favourite Olly Murs tops the Saturday night bill with his chart-topping hits, and the festival will come to an epic close with British giants Madness on the Sunday. The weekend will also feature funky hip-hop trio De La Soul, X Factor winner Louisa Johnson, along with Gentleman's Dub Club, Dodgy and Feastival veterans Cuban Brothers and Norman Jay MBE. The Big Feastival will be showcasing the very best of up-and-coming musical talent with the likes of Frances and BETSY taking over the stage, and an exciting new partnership with BBC Music for 2017.

Top chefs, restaurateurs and firm family favourites will be sharing pearls of culinary wisdom in the NEFF Big Kitchen including: Rick Stein and son Jack; two Michelin star chef Nathan Outlaw; celebrity television chef Cyrus Todiwala; acclaimed restaurateurs José Pizarro, Mark Hix and Robin Gill; Great British Bake Off winner Candice Brown and many more. For those who are keen to roll up their sleeves and get stuck in, the NEFF Cookaholics Cookery School offers a hands-on experience where visitors learn how to get creative in the kitchen. What's more, the NEFF Little Kitchen, led by TV favourites Tom and Henry Herbert, provides interactive cookery classes to encourage budding young chefs to try something new.

Festival-goers who have worked up an appetite with all of that entertainment will enjoy sampling the very best in British Street Food. With a huge range of award-winning delights, every taste bud will be dazzled!

Founder Alex James said: "It’s an honour to host The Big Feastival on the farm for the sixth year running. With the incredible line-up, there’s something for the whole family… This is going to be our biggest and best year yet.  Last year tickets sold out in record time and we know it will be no different in 2017."

Dedicated to festival fun for allthe family, The Big Feastival line-up means even the biggest kids will be completely spoilt for choice this summer. They can take on the Little Dudes’ Den, pop along to the Farm Park, laugh with cheeky duo Dick & Dom, delight in entertainment from children’s TV megastar Justin Fletcher and much, much more.

This year The Big Feastival is proud to be partnering with NEFF, Birra Moretti, Renault, BBC Music and Roald Dahl's Marvellous Children's Charity.