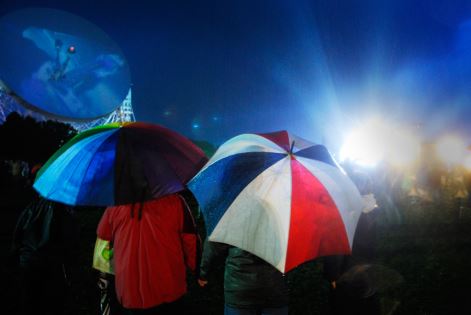 The final two Transmissions of 2013 are highly anticipated as Sigur Rós and the Hallé headline.

The (star) dust has finally settled on two extraordinary Transmissions that took place at the Jodrell Bank Observatory at the beginning of July as The Australian Pink Floyd and New Order headlined these unique events.  The benchmark had been set high as The Flaming Lips and Elbow had performed in previous years but both shows enthralled music and science lovers who had gathered in glorious sunshine to see the bands perform truly memorable shows.  Johnny Marr was hand-picked by New Order to support them at their show and the acts raised temperatures even further as Bernard Sumner joined Johnny on stage to reprise their Electronic days and perform ‘Getting Away With It’.  Both New Order and The Australian Pink Floyd took the Live From Jodrell Bank series to another dimension by beaming bespoke projections onto the 76m Lovell Telescope to devastating effect.
The Hallé, one of the world’s most sought after orchestras will be performing a very special Close Encounters Prom conducted by Stephen Bell.  This wonderful summers evening of classical music is inspired by the stars, including Jupiter and Mars from Holst's The Planets, classics from Strauss, Mozart and John Williams, as well as a selection of out-of-this-world film music from blockbusters such as: Star Wars, Independence Day, E.T., Apollo 13, Close Encounters and more.
Added to the bill for this show is Broadway and Beyond, brainchild of award winning West End star Adam Lacey and international opera star, platinum selling recording artist & BBC TV and Radio presenter Jon Christos.
With the ever increasing popularity of music from The West End/Broadway they have put together the Broadway and Beyond concept, showcasing a journey through some of the world's most loved music to grace The West End and The Silver Screen and have performed to millions of people in the UK not only creating awareness and wowing their audiences wherever they were heard but also raising hundreds of thousands for charities such as Help for Heroes, Breakthrough Breast Cancer, The Retail Trust, BBC Children in Need, Cancer Research UK, Prostate Cancer UK as well as various regional charities.
Jon and Adam will be joined at Jodrell Bank by classical superstar Jenny Williams and classical crossover soprano Edel Lucy for three separate Broadway and Beyond performances which will take place throughout the day.  ‘Beyond Swing’ will feature swing classics such as Come Fly With Me, Fly Me To The Moon, My Way and a host of other huge swing tunes whilst ‘Licence To Thrill’ is a James Bond lover’s dream featuring tracks such as Skyfall, Nobody Does It Better and Live and Let Die.
‘Best Of Broadway and Beyond’ will feature an hour of classics including Nessun Dorma, Moon River, Music Of The Night and many more instantly recognisable show tunes.
Also confirmed is Tom Middleton who will be performing a Sounds Of The Cosmos set.  Tom is keeping the exact nature of his show under wraps for now but expect some very exciting musical collaborations to take place on the day.
The concert will also give participants a very special opportunity to celebrate the life and work of the late Sir Bernard Lovell, Founder and first Director of the Jodrell Bank Observatory. Sir Bernard, who passed away in 2012, would have celebrated his 100th birthday on the day of the concert and was a long standing supporter and follower of the Hallé, often travelling into Manchester from his home near Jodrell Bank to attend concerts.

Enhancing the convivial atmosphere at this stunning location will be a wide range of artisan food and drink. High end, bespoke picnic hampers will be available to order in advance courtesy of Just Picnics, the picnic company of choice for outdoor concerts, theatre and sporting occasions and there will be many stalls selling organic and locally sourced products.  Pimms, Prosecco, fine wines and a selection of hand-picked real ales will be available as well as teas and traditional lemonades.  Two VIP packages are available for those wishing to enhance their experience at this exceptional event.

Closing proceedings will be a dazzling firework display as the Jodrell Bank skyline is illuminated with colour.  This finale will be unmissable as the Lovell telescope transforms into a spectacular backdrop for the final time in the 2013 Live From Jodrell Bank series.

Before the spectacular evening concerts and throughout each day, attendees will be able to participate in a fantastic range of hands-on experiments, lectures and workshops on site at Jodrell Bank.  With full access to the magnificent Discovery Centre included in every ticket, this is a great chance to find out more about the mind-blowing research happening at Jodrell Bank and beyond.