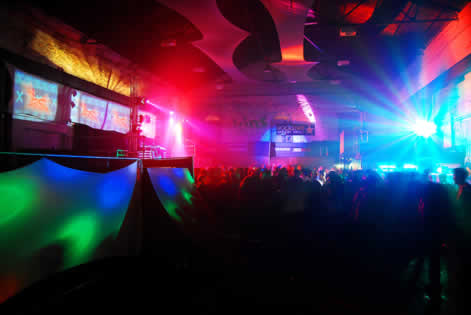 The start of the UK party season this year is led by Bristol’s pioneering party starters In:Motion. A series of incredible events striking hot on the heels of last year’s triumphant first season, which tore a hole in the skate park come club Motion, spread across five rooms indoors and out. 2011 brings artists from all musical persuasions capturing everyone from the heroes of the scene to the rising stars and bringing all manner of brands from the electronic music community together to embrace all dimensions of the underground dance movement.

The peerless Hessle Audio make their debut for the In:Motion series on 15th October,standing head and shoulders above the rest with performances from Jamie XX and Jamie Woon. Jamie XX’s movements out of his band, The XX to DJ and remix artist have been well received with heavyweights such as Radiohead’s Thom Yorke,
Florence and The Machine, and Canadian rap giant Drake. Jamie also released one of the anthems of the summer on NMBRs in the form of ‘Far Nearer’. Since Jamie Woon came onto the scene everyone has been scrabbling for the opportunity to see him live. His album debut ‘Mirror Writing’ saw him strike a terrific balance between convention and subversion, producing dubstep infused commercial tracks, alongside equally enigmatic and enchanting productions. Both of these artists are a rare sight in a club setting, but Bristol In:Motion’s festival atmosphere found within numerous intimate and vast spaces is an apt fit for these two sonic masters.

Bugged Out return for 2011 on the opening weekend on October 8th, bringing Jamie Jones, now a household name for a new generation of house and techno fans through his Hot Natured guise and Hot Creations label. It will have already been an amazing week for L-Vis 1990 & the Neon Dream who will have just released their staggering new album ‘Neon Dreams’ which features Para One, Teki Latex and
Julio Bashmore. L-Vis 1990 (aka James Connolly) a London-based DJ and producer co-founded the groundbreaking Night Slugs imprint with Bok Bok. Also kicking things off in the first week is Fake Blood aka Theo Keating aka Touché. Under his many aliases, the man like Keating has produced some classics over the years remixing the likes of Underworld, Hot Chip & UNKLE. He’s become somewhat of a Bugged Out! family member and will bring his bass heavy bangers to the floor.

Sharing the bill on opening weekend are firm friends and In:Motion family favourites Hospitality, who bring Danny Byrd, High Contrast and MJ Cole amongst others.  Bringing together bass heavy music, an electrifying atmosphere and second to none production, Hospitality have grown into true titans of the scene, consistently
bringing the best in show-stopping DJs from the constantly evolving drum & bass scene to a hugely faithful crowd. This summer they represented at the Parklife festival, ripped apart their own stage at Lovebox and set things alight at Global Gathering. D&B is back in Bristol, its spiritual home.

Sven Vath’s Cocoon, are to techno what light is to fire. They continue to touch thousands of people across every continent with their inimitable brand and unfaltering show. This December they will bring it to Bristol for the first time. The now iconic Tiefschwarz headline the show, exemplifying their playful talents for putting everything from electro to tech-house and slithering minimal under the scope and turning out consistently compelling sets.

Bristol’s own Just Jack bring Soul Clap on the 29th October to headline their highly acclaimed Halloween party The Gunpowder Plot which will be complete with circus acts and fireworks. The trend-setting American East coast duo leapt to fame through their relationship to the esteemed Wolf + Lamb family. This year saw them bridge new levels of notoriety through their special DJ Kicks album.

Moving back a little to November and BBC Radio 1’s Toddla T will make the crossing from Sheffield counties to blow the roof of Motion once again. Toddla T has firmly established himself in the last few years with production and heavyweight remixes for the likes of Roots Manuva, Hot Chip, Gorillaz and Tinchy Stryder and more, plus a DJ rep so strong that it bagged him a regular Radio 1 show.

Festival brands BLOC will join heavyweights Run and Bristol favourites Futureboogie, who bring the infamous Henrik Schwarz, ensuring there is something for every musical taste on show.

Add to that the incredible production team and a venue that verges on festival status with five rooms of varying calibre, and In:Motion’s second year is set to be bigger and better than anything else on the radar. 2011 sees improved sound engineering and facilities such as food court and photo booth.

Published on 14 September 2011 by Wayne Feltham