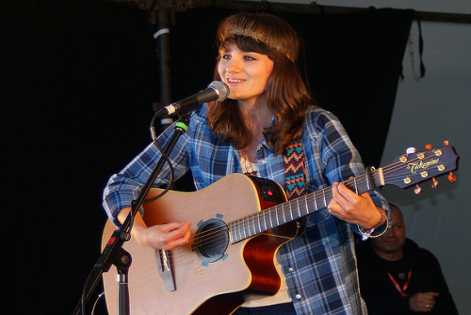 We’re also delighted to have secured Leeds-based, folk-pop quintet Ellen and the Escapades. After winning 2010’s Glastonbury Emerging Talent Competition and playing the BBC Introducing stages at Leeds and Reading the band has gone on to enjoy an...

We’re currently in negotiations for our next big band announcement. So while we dot the i’s and cross the t’s of the contractual paperwork, we thought we’d give you a little teaser to keep you all chomping at the bit! Added to the line up over 31st August - 2nd September we can confirm two local bands; The Chevin and Ellen and the Escapades. Plus two more from further afield: Citizens! and Sadie and the Hotheads.
Taking to two of our three stages in Myrtle Park our new recruits join: Nero, DJ Fresh, The Pigeon Detectives, Hard-Fi, The Charlatans, Maverick Sabre, Delilah, Kids in Glass Houses, Katzenjammer, The Idiot B*stard Band, StooShe, Yes Sir Boss, Miles & Erica, Skinny Lister,  King Charles and The Lancashire Hot Pots.
As some of you may know, The Chevin, are an up-and-coming four-piece from Otley. Named after the dominating local natural landmark, the band’s dramatic sound seems to be influenced by West Yorkshire’s scenery. Having met at Prince Henry’s Grammar School, the band has quickly progressed to opening for White Lies and The Pigeon Detectives. Released at the end of 2011, their Champion EP is characterised by epic, uplifting songs that are filled with intense energy. Our local heroes’ heady aspirations are sure to guarantee a place in the nation’s arenas. So see them up close at personal at BML while you can!
We’re also delighted to have secured Leeds-based, folk-pop quintet Ellen and the Escapades. After winning 2010’s Glastonbury Emerging Talent Competition and playing the BBC Introducing stages at Leeds and Reading the band has gone on to enjoy an exciting couple of years. This success culminated in last month’s release of their debut album All the Crooked Scenes. With an impressive local fan base we’re expecting a great crowd atmosphere while soaking up Ellen’s stunning, smoky vocals and bittersweet, compelling songs.
Next up we have Citizens! whose name is a determined call to action. They come armed with a persuasive treaty to reclaim the pop cause with style and panache. Backed by a handful of infectiously catchy tunes, these five London lads are freshly signed to hip French music and fashion label Kitsuné. The band’s second single Reptile was released last month to great acclaim, with NME describing it as having ‘a perfect pop chorus.’ Expect imaginative, fresh pop that has integrity and depth – come the end of summer Citizens! could be big news.
American, Downton Abbey actress and singer songwriter, Elizabeth McGovern brings her irrepressible, guitar-toting alter ego and band to BML. Sadie and the Hotheads succeeded in making an impression at a select handful of festivals last year so we’re looking forward to seeing Elizabeth / Sadie ditch the corset for a pair of skinnies on the BML stage.
Big Heart, Big Sounds
Bingley Music Live has firmly established itself on the festival circuit; impressing audiences and performers alike with its intimate, friendly atmosphere and professional organisation. The chance to really get up close and personal to your favourite bands is one of the event’s stand-out features, meaning that festival goers can get to the heart of the action.
The improved Raise the Roof stage will include a bigger tent, beefed-up production and a new musical policy to provide a point of difference to the main stage while maintaining a high calibre of bands. This year also see the introduction of a new third stage. Organised in association with the Musician’s Centre the new stage is dedicated to local acts and will focus on uncovering the latest unsigned talent.
BML benefits from its amazing venue, Myrtle Park, the perfect festival location. Set in a natural amphitheatre and bordered by stunning mature woodland near the pretty River Aire, first timers are always blown away by the beauty of this hidden gem. With its picturesque backdrop BML is a great destination for families wanting to share the festival experience. Not only is there space to chill out, there are specially organised kids activities in a dedicated family area.