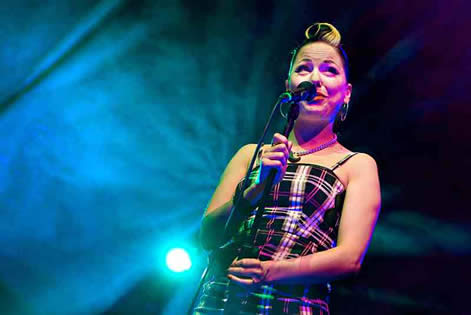 New festival Jolly Day Out has confirmed Imelda May and McFly to play on Hampton Court Green in August with more entertainment announced.

PWR Events and Historic Royal Palaces are delighted to announce a new Summer Festival for the whole family - Jolly Day Out, which will take place from Friday 26th – Monday 29th August 2011, on Hampton Court Green. Kids under 12 go free and tickets go on sale on Friday 13th May.

Each day a headline act will take to the main stage and we are delighted to confirm Imelda May (26th), Bjorn Again (27th) and McFly (28th) will be performing with an extra artist to be announced shortly.  Throughout the day there will also be a great mix of bands and activities on the stage for everyone.

Jolly Day Out is all about the family so that means keeping the kids entertained. There will be live shows in the theatre every day with Charlie & Lola’s Best Bestest Play and HORRIBLE HISTORIES.

Festival Fun planned with hourly story- telling from The Roald Dahl Museum  as well as hands-on interactive demos with the coolest experiments from the Science Museum.  Kids of all ages can monkey around recreating all the excitement of a Royal Tournament in Henry the Apes Arena, learn circus skills in our very own Big Top, make arts & crafts, have their faces painted and jump on our traditional funfair rides keeping them entertained for hours.