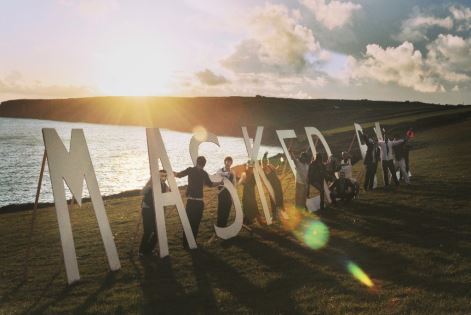 The Masked Ball can now reveal that Groove Armada, 2ManyDJs, Norman Jay MBE, London Elektricity and many more are also set to join their creative weekender on 20th – 22nd May.

Cut into a cliff-top near Porthleven and overlooking stunning Mount's Bay, the Masked Ball is an immersive multi-level party kingdom populated by a kaleidoscope of cool and crazy characters, all dressed to excess.
The 10th birthday Masked Ball - this year staged over three days, each with its own very special vibe - will boast 12 elaborately-themed arenas,
There'll also be whole new area modelled around 'A Manor House' - a stately home inhabited by the most debauched and demented members of the aristocracy, complete with its own unique take on the traditional garden fete and featuring bizarre attractions like live pig racing, a huge waterslide and hot tubs.
Shaping up as what’s set to be an incredible showcase of talent across the electronic music spectrum, the first to join festival headliners Basement Jaxx and Jungle is Groove Armada, who will return to Porthleven after making their festival debut back in 2014. Eclectic selector’s 2ManyDJs – the touring alias of Belgian outfit Soulwax – are also billed, whilst purveyor of ‘Good Times’, the legendary Norman Jay MBE, will deliver a masterclass in turntablism for partygoers seeking an injection of funk, soul and jazz. Elsewhere, an appearance from drum and bass institution London Elektricity is scheduled alongside MC Dynamite, with creative party-starters krankbrother no strangers to the festival’s themed proceedings.
With a host of support also coming from the likes of Solid Steel’s DJ Cheeba who will be providing an extra special tribute to the late great David Bowie, as well as Stockholm club scene stalwart Mad Mats, The Masked Ball’s immersive offerings will be just as impactful – providing a multi level party kingdom where themed venues range from the outrageous to the downright spectacular. Expect a myriad of rooms, dancefloors, dens, hidden bars and even bathtubs that are all themed around a majestic stately home, making The Masked Ball’s ‘decade of decadence’ milestone one certainly to remember.

Published on 12 February 2016 by Wayne Feltham