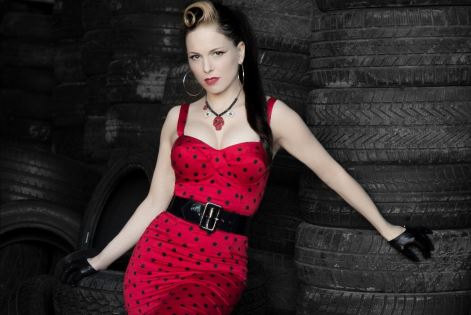 As the first major festival of the summer, The Isle of Wight Festival today reveals fourteen brand new acts for this year’s event in celebration of the first week of the brand new year!

These acts join the already announced Fleetwood Mac, The Prodigy, The Black Keys, Pharrell Williams and Paolo Nutini for what is already shaping up to be the hottest ticket for the summer. Tickets are on sale now from www.isleofwightfestival.com. The Isle Of Wight Festival 2015 will take place at Seaclose Park, Newport, Isle of Wight.

Formed in the early 80s, alt-rock band James rose to success during the 90s with hit singles “Come Home”, “Sit Down” and “She’s a Star”. The band has sold more than 25 million albums worldwide and with the addition of new record ‘La Petite Mort’, released in 2014, the band have released a staggering 13 studio albums.

Irish singer-songwriter Imelda May was born and raised in Dublin. She began her music career at the age of 16 and was nominated for a Choice Music Prize in 2010 following rave reviews of her third album ‘Mayhem’. In 2011 she played to a sold out O2 Dublin, joined on stage by U2 frontman Bono. In April of last year May released her most recent album Tribal which debuted at No.1 in the Irish album charts.

Paul Oakenfold’s stature as a DJ and entertainer is beyond magnitude, and with three Grammy nominations under his belt, he is one of the true legends of electronic music. For over three decades has elevated and shaped an entire genre, remaining one of the leading forces in the global music scene today. Not only has he produced some monster hits, he is also responsible for having created film scores for a long list of Hollywood blockbusters.

English indie rock quartet Courteeners released their first album in 2008 and were awarded the ‘Guardian First British Album Award’. Two gold status records, countless arena shows and support tours with Noel Gallagher and The Stone Roses later, the band released their latest studio album ‘Concrete Love’ in August 2014. The record peaked at No. 3 in the UK album charts and was supported by a November tour, and the band will play their biggest gig to date at Heaton Park this June.

Californian songstress Suzanne Vega released her first album in 1985 and has since achieved millions of record sales worldwide, with two of the albums earning platinum status. Vega has been the recipient of multiple awards including a Grammy award for Best Recording Package and an NME Award for Best Female Singer, and has cemented her role as a leading figure of the folk-music revival, starting out with just her acoustic guitar and developing into one of the most noted songwriters of her generation.

Irish alt rockers Ash rose to success in the mid 90s with a No. 1 album ‘1977’ and hit singles including ‘Girl From Mars’ and ‘Goldfinger’. Their subsequent five albums all went Top Ten, with four Top 20 singles including ‘Burn Baby Burn’, ‘Shining Light’ and ‘Jesus Says’ and a new album due in 2015, Ash are still very much a force to be reckoned with.

Singer-songwriter Foxes is best known for her vocals on 2013 single ‘Clarity’ which peaked at number eight on the Billboard Hot 100 and won a Grammy award for Best Dance Recording. Her debut album ‘Glorious’, which was released in 2014, reached No. 5 in the UK charts and received rave reviews.

Formed in 1989 by Ian Broudie in Liverpool, The Lightning Seeds became alt-rock icons throughout the 90s, achieving a No.1 with their single 'Three Lions' which featured David Baddiel and Frank Skinner and was used as the official anthem for the English football team in the 1996 European Championships. In 2013 the band headed out on a support tour with Blondie as well as performing several summer festivals.

MBE Sharon Corr is best known as a member of the pop-rock band The Corrs, which she co-founded in 1990. In 2012 Corr became a coach for Irish talent show The Voice of Ireland and finished her second album, ‘The Same Sun’, of which the lead single ‘Take A Minute’ peaked at No.11 in Ireland.

Geno Washington, famously name-checked in the worldwide smash hit ‘Geno’ by Dexy’s Midnight Runners, came to England in the 60s as part of the US Air Force and soon fell in with the London blues and soul scene where he sung with acts such as Georgie Fame and the Blue Flames. The band quickly became established as one of the most exciting live acts around and they continue to wow crowds all over the world.

Mercury Music prize nominees The View rose to prominence in 2007 with their chart topping debut album ‘Hats off to the Buskers’. The third single from this album, ‘Same Jeans’, debuted in the UK chart at No.3. Three Top 20 albums later, the band are set to release album number five this spring with The Strokes’ guitarist Albert Hammond Jr on production duties.

All founding members of the original band, UB40's Ali Campbell, Astro and Mickey Virtue sees the legendary voice of the band reunited with Astro and Mickey. The band enjoyed huge success over a three decades, including a No.1 album ‘Labour of Love’ and multiple Top Ten, gold and platinum selling albums and Grammy nominations. Selling over 70 million records worldwide the band released their new album ‘Silhouette’ in 2014.

Returning to The Isle of Wight Festival after previously performing in 1970 is MBE Ian Anderson who will play the best of Jethro Tull. Formed in 1968, Jethro Tull were, by the mid-seventies one of the most successful live performing acts on the world stage, rivalling Zeppelin, Elton John and even the Rolling Stones. With now some 30-odd albums to their credit and sales totalling more than 50 million, Tull are still performing typically more than a hundred concerts each year.

Formed in 2010, French band La Femme have kept themselves quite the enigma. We do know that their psych-rock sound which is described as a cross between The Velvet Underground and Kraftwerk has garnered high praise in the press, being covered by the likes of NME Magazine and Pitchfork. A sensation in their homeland, the band won the 2014 Victoires de la Musique award for best album by a new artist.

Published on 12 January 2015 by Ben Robinson