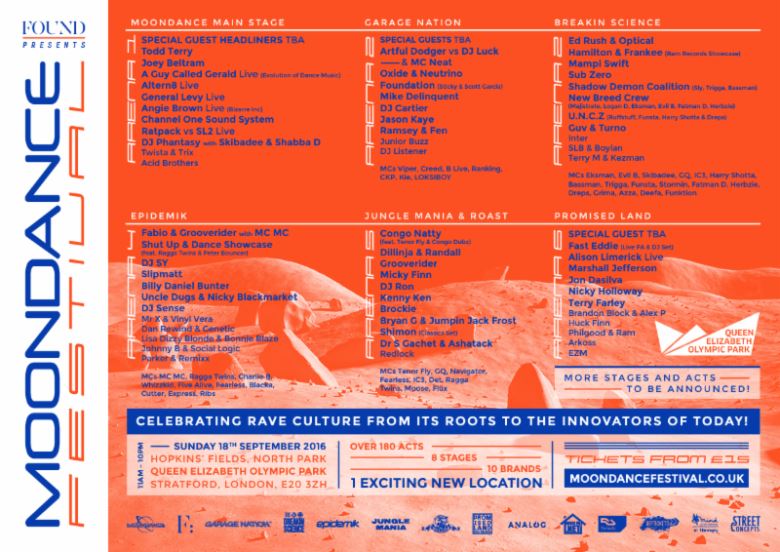 Found presents Moondance Festival, unite with some of the UK's most prestigious, independent promoters to celebrate the pioneers of dance music, showcasing the best in old skool, drum & bass, garage, house, jungle and grime. Taking place at a new location, Queen Elizabeth Olympic Park in east London on Sunday 18th September 2016, Moondance Festival will be one of the first electronic music events hosted on the iconic site.

Following four sold out festivals at Finsbury Park, the promoters who have been behind these festivals feel it's time to take you on a new adventure to an exciting, previously unused London site...

Celebrating 21 years in the industry, the main stage will be hosted by Moondance, who have assembled a lineup that spans some of dance music's most influential figures. Highlights include a headline set from US house and garage producer Todd Terry, leading house and techno artist and dance music pioneer Joey Beltram. A Guy Called Gerald will play an exclusive 'Evolution of dance music' Live set from acid house to jungle, with further performances from infamous figures of club culture including live sets from Altern8, Angie Brown, DJ Phanatasy with SAS, Channel One, General Levy and Ratpack vs SL2.

As the biggest garage brand on the planet, Garage Nation are also to host an arena. Drawing on 18 years of experience, they have assembled a lineup that includes seminal garage act Artful Dodger and DJ Luck & MC Neat playing a special collaborative performance.  Oxide & Neutrino, Mike Delinquent and DJ Cartier are also set to appear, as well 90s garage pioneers Sticky and Scott Garcia playing as Foundation.

Award winning drum & bass promoters Breakin Science will be ramping things up in their arena with a headline set from Virus Recordings' Ed Rush & Optical. Showcasing Ram Records will be Hamilton & Frankee plus from the Playaz camp Sub Zero, as well as performances from Mampi Swift, Shadow Demon Coalition, New Breed Crew and the return of U.N.C.Z.

Jungle Mania and Roast join forces to host an arena that will satisfy even the most hardened of jungleists. Congo Natty alongside Tenor Fly & Congo Dubz will take top billing with further highlights including Dillinja & Randall, Micky Finn, Kenny Ken, Bockie, Bryan G & Jumpin Jack Frost and a jungle classics set from Shimon.

With plenty of surprises still to come, Moondance Festival's final two arenas are still to be revealed as well as further headline acts to be announced for the main stage and Garage Nation arena.

Promoting the same egalitarian and unifying ethos that underpinned early dance music culture, Moondance Festival will have no VIP arena, with festival-goers free to enjoy every stage throughout the day.

SPECIAL GUESTS TO BE ANNOUNCED

SPECIAL GUESTS TO BE ANNOUNCED

SPECIAL GUEST TO BE ANNOUNCED

ARENA 7 - TO BE ANNOUNCED

ARENA 8 - TO BE ANNOUNCED