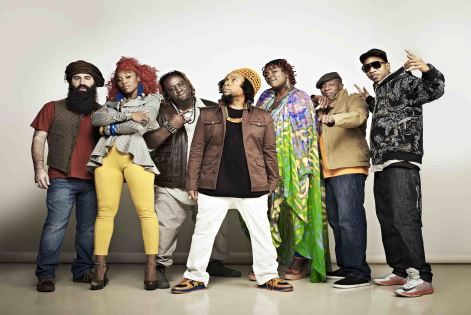 Double Grammy Award-winning HipHop trailblazers Arrested Development are now confirmed to headline the main Pallet Stage on Sunday night. With classics such as 'People Everyday', 'Tennessee', 'Revolution' and the ubiquitous 'Mr Wendle', Arrested Development will close the festival in style.
Performing immediately before Arrested Development will be Squeeze, one of the UK’s greatest New Wave / Post Punk bands. Formed in Deptford in 1974 and still fronted by the original partnership of Glen Tilbrook and Chris Difford, Squeeze’s hits are almost too numerous to list. However ‘Cool For Cats’, ‘Up The Junction’, ‘Labelled With Love’ and ‘Another Nail In My Heart’ are just a few of those that are surely set to feature in this very special performance at Bearded Theory.
Other additions to the main stage lineup include post-rockers Rumour Cubes; unique German punk-reggae band The TiPs; poetic punks Wonk Unit, Banjo & Trombone-led 5-piece Mado et les Frères Pinard and London based Ska favourites, Popes Of Chillitown.
Festival favourites The Bar Steward Sons Of Val Doonican will also perform on the Woodland stage on Thursday (headliner still to be announced), by popular demand.
Bearded Theory Festival takes place between Thursday 26th and Sunday 29th May 2016 in the fabulous surroundings of South Derbyshire’s Catton Hall. With interest at an all-time high, and tickets selling faster than ever before, this year undoubtedly boasts the strongest line-up in their 9-year history.
As already announced, Saturday night’s headliners are Public Image Ltd. Their legendary frontman John Lydon will be bringing his customary swagger to the Pallet Stage, along with PiL’s incendiary back catalogue that includes classics such as ‘Death Disco’, ‘Public Image’ and ‘This Is Not A Love Song’.
Friday night’s headliners are the massively popular Folk-Rock festival specialists, Levellers. Returning to Bearded Theory after their triumphant performance closing the festival in 2013, they will undoubtedly be one of the highlights of the weekend.
From Billy Bragg, Killing Joke and Jack Savoretti, to Reverend & The Makers, Dub Pistols and legendary Dr Feelgood guitarist Wilko Johnson, the rest of the line up includes an embarrassment of riches for music lovers across the musical spectrum. Just some of the many other highlights from across all five live stages include reggae legends Black Uhuru, Cockney Rejects, folk-poet Beans On Toast, Bruce Foxton’s From The Jam, and million-selling acoustic duo Turin Brakes.
As you would expect from a festival described by The Daily Mirror as ‘One Of The Best Family Festivals’, The Children’s Village is extensive. In addition to a large and well-equipped family camping zone, a ‘rogues hideout’ for teens, a full baby care tent and a huge variety of coordinated ‘Village Green’ style activities (all staff CRB-approved), Bearded Theory is the only festival in the UK to offer a completely free, fully OFSTED-approved on-site school, allowing children ages 5-16 to be eligible for authorised absence.
Bakewell’s independent Thornbridge Brewery will continue their successful relationship with Bearded Theory, once again running the on-site bars and bringing with them a wide selection of Ale’s and Ciders at exceptionally reasonable prices.
Michael Eccleshall, spokesperson for Bearded Theory Festival says, “We are proud to announce some fabulous new additions to the line up for Bearded Theory. From headliners PiL, Arrested Development and Levellers to Jack Savoretti via Turin Breaks, Killing Joke, Black Uhuru and Dub Pistols and more than 100 other acts across five live stages, there really is something for everyone this year.
As always, the wholly independent ethos of Bearded Theory means we strive to deliver both excellent value and a high quality event, and by keeping the cost of a full adult weekend ticket under £100 you can spend 4 brilliant days watching over 100 high quality artists and enjoying some magical experiences for an exceptionally reasonable price.”

Published on 11 February 2016 by Wayne Feltham