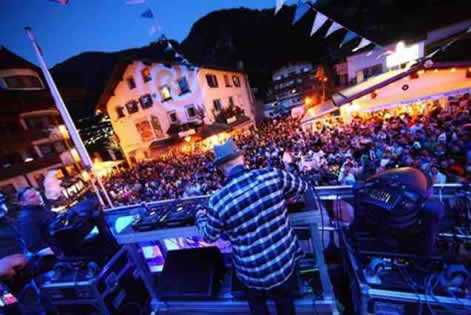 Time to get irie in the open air at Snowbombing! Showcasing the smoothest most laidback joints in a stunning alpine setting, Rompa’s Reggae Shack will be located on a purpose-built sun terrace some 5000 feet above sea level with spectacular views over the surrounding slopes.
Situated at the bottom of Red 7 piste, on the right hand side in the ‘Eisberg Hutte‘, the Reggae Shack stocks the finest roots, ska and dub nuggets. DJs on rotation will include Fattie Boom Boom, Savage Henry, Daddy Nature, Dusty Lungs and The Farm Yardies.
Also expect special guest performances from none other than Oneman, Barry Ashworth, Marcus Nasty, Shy Fx, Tayo, and Sgt pokes, (with more to be confirmed); not to mention some extra special shenanigans from the likes of party enthusiasts Raffle Mafia (with Bingo Banton and DJ Smash Hits), who’ll be making an appearance with their specially crafted alpine party antics! So remember… Better dread than red (run)!
The World’s Greatest Show on Snow is pleased to announce yet more acts to an already bulging lineup. Kicking off with the fantastic Maceo Plex who has just been placed at number 5 in the Resident Advisor top 100 DJ poll. Well-done Maceo! Known best for his dark and warming take on deep house, he will be joining Snowbombing from his new home in Valencia. ‘Entrance Song’ is the fitting title that turned Bristol newcomer Eats Everything into one to keep an eye on in the coming years.

Hessle Audio label boss and Rinse FM king Ben UFO will also be coming along bringing his unique and entertaining take on everything House and UK Bass with him. London and Bristol join forces with a performance for both your ears and eyes from the almighty Urban Knights. The 6-strong Mancunian group, North Base will be delivering their superb 90’s vibe and rising star DJ Socom who’s not only a pro-snowboarder but also turns a dab hand to Drum and Bass. For Boarders by Boarders are bringing their very own El Chico to the table. Silly hat – donning party favorites Sombrero Sound System are on board and not forgetting Mayrhofen locals Daniel P & Tom Relay who will be there with (cow)bells on. WOW! Catch your breath….
If this isn’t enough to whet your alpine appetite, the mighty BACKCOUNTRY PARTY announces that super-cool Caze Nove will be presenting THE ROXY at Snowbombing’s most surreal party. Taking place in a lumberjack’s mountain retreat in the middle of nowhere; it’s where oompah and DJ culture meet head on, fuelled by gluwein heated over a bonfire, mystical schnapps and homemade Jagertea… For the already legendary Backcountry Party we're raising the bar even higher!
As one of the largest and most highly regarded resorts in the world Mayrhofen is completely taken over for a week long party of hedonistic adventure and extreme sport. The resort also boasts some of Europe’s most lavish spas so you can relax and enjoy the amazing spring sunshine and snowy mountains of one of Europe’s most snow-sure, late season winter resorts. The nearby Tux glacier (Austria’s highest lifted point) is also only a short (free) bus ride away, and although open all-year round, it’s at its best in spring.
Snowbombing is an entertainment and accommodation package, where you can choose a variety of accommodation options to suit your preferences and budget; from 5 star luxury Spa hotels, to pocket friendly pensions. You can add a variety of extras to build a package to suit you including a variety of lift passes, bespoke parties, including the infamous Arctic Disco and the bonkers Backcountry Party plus ski & snowboard lessons, equipment hire and airport transfers.

Check out Snowbombing for all booking details

Published on 11 January 2012 by Wayne Feltham