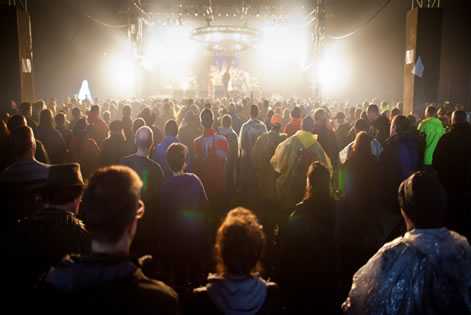 Dateline Kinross, Saturday 7th July 2012… It was wet underfoot but it was hot everywhere else.

Mid-afternoon at the Transmissions Stage, and Edinburgh-born, London-based foursome Django Django brought the groovy good times to T in the Park. With their self-titled debut album racking up rave reviews and anticipation of a Mercury Awards nomination, the half-Scots, quarter-English, quarter-Northern Irish newcomers staked their claim to the Best Debut T Performance award.

Multi-part harmonies, matching tops, tunes you could hang your yellow poncho on, and a giant tambourine that rivalled the T funfair’s big wheel for girth – Django Django were the weekend’s brand new sensation. Not least because at times they suggested a brilliant update of fondly remembered repeat T heroes The Beta Band. Which is maybe no surprise, given that drummer Dave Maclean is the brother of Beta Bander John…

Over on the Main Stage, Jessie J was busy proving one truth: when in doubt, pop will out. The helmet-bobbed diva belted out hits Price Tag and Do It Like A Dude. Resistance was futile: the Kinross masses sang along with ear-battering gusto.

Also proving the power of a chunky tune was Noel Gallagher’s High Flying Birds. T in the Park veterans still recall with misty-eyed fervour Oasis’s appearance at the first ever festival, way back in 1994. Gallagher senior ably demonstrated his decade-straddling staying power with a set largely drawn from his first post-Oasis album, but sprinkled with a choice selection of Oasis classics.

As day two of T headed to its climax, there was a three-way headline act pile-up. On the Radio 1/NME stage, superstar DJ David Guetta took the roof off. Quite a feat in a field. In a packed, sweaty, rave-tastic King Tut’s tent, local hero Calvin Harris tipped his hat to Guetta with a spin of the Frenchman’s hit single Titanium, plus outings for most of his own dancefloor-killing hits. With the world in the grip of dance-mania once again, Dumfries-born Harris smoothly demonstrated the skills that have had Rihanna and Cheryl Cole put the writer/producer/DJ on speed-dial. As he spun the beats from behind an elevated, light-studded booth, Harris ensured T in the Park made some serious noise.

On the Main Stage, finally, it was the return of the kings. The Stone Roses lit up T in the Park with the first UK festival appearance of their second coming. Ian Brown prowled the stage and John Squire’s guitar blazed into the night sky as classics like Sally Cinnamon and I Wanna Be Adored encourage mass singalongs. By the time of the cataclysmic I Am The Resurrection, it was clear. History had been made at T.