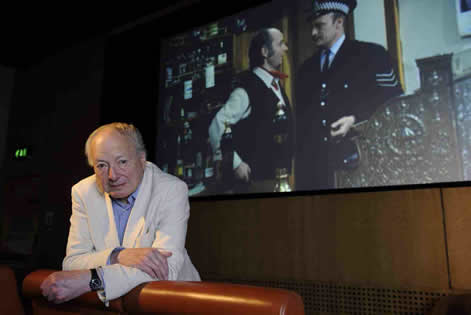 Author and film director, Robin Hardy - most famously known for directing the 1973 cult classic The Wicker Man - made a special visit to Glasgow today (6 July) to mark the 10th anniversary of The Wickerman Festival.
One of the UK’s best loved music festivals, which is held on farm land in Dumfries & Galloway, is celebrating its 10th anniversary this month, serving up the most diverse, idiosyncratic line up to be found in the UK. With the likes of James, Feeder and The Coral plus many more taking to the stage.
Named after The Wicker Man which was filmed in the area, each year a giant 40 foot willow effigy is built on site by local craftsmen and torched at the festival’s climax at midnight on Saturday, creating the most iconic image of the festival calendar.  Robin Hardy was the first person to set light to the Wickerman in 2002.
To help mark the anniversary, Robin Hardy made a special visit to Glasgow to join Wickerman Festival creators Jamie Gilroy and Sid Ambrose at the Grosvenor Cinema to launch the festival and to discuss his new film The Wicker Tree before it premieres in the US this month.


Robin Hardy said:  “I love returning to Scotland to make films.  I have many happy memories of the filming of The Wicker Man.  Jamie and Sid have created a perfect homage to the movie and it’s good to know more than 100,000 visitors have enjoyed the festival over the years.  The Wicker Tree, a black comedy in the genre as The Wicker Man, will be released in the UK later this year.  Because it is full of themes taken from Scotland’s pagan past, I hope and believe that Scots will take it to their hearts.”
The Wickerman Festival takes place in Dundrennan, Kirkcudbright, Dumfries & Galloway on Friday 22 and Saturday 23 July 2011 with the original Wicker Man as the theme where attendees are encouraged to wear fancy dress.