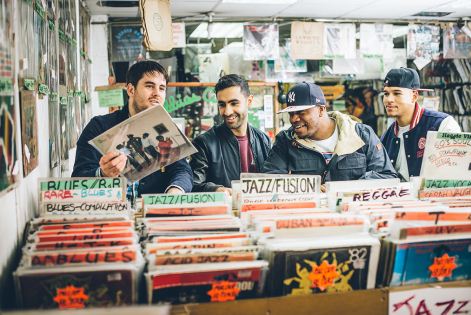 With just over 4 months to go until Wakestock returns to Cardigan Bay we know that you are eagerly awaiting news of the line up, so here we go! RUDIMENTAL are just one of the latest additions. Their debut album is due to drop soon. The latest single “Waiting all Night”, is the follow up to the previous huge singles 'Feel The Love' which charted at number one, and 'Not Giving In'. They have a massive year ahead of them, and the Wakestock crowds are sure to love their full live stageshow.

WRETCH 32 is back with a brand new album, the first single off which “Blackout” has been declared Zane Lowe’s hottest record this week. Wretch emerged from the same North London scene as Devlin and Chipmunk. Picked up by Ministry of Sound, Wretch released his first major-label single “Traktor” in 2011, before his first album ‘Black and White’ was released in August of that year. He has since gone on to release collaborations with the likes of Ed Sheeran and Angel, and received ‘Best International Act’ at the 2012 BET Awards.
THE TODDLA T SOUND will hit the Wakestock stage with a bang. Radio 1’s Toddla released his second album ‘Watch Me Dance’ last year, and has since been busy touring the album as The Toddla T Sound. With the Toddla T Sound shows Toddla twists his normal DJ sets into a soundsystem format, he’s teamed up with UK soul & garage legend Shola Ama, Broke’N’English’s MC DRS, and the inimitable Serocee. The result, combined with a bespoke visual show, exclusive material and vibes-a-plenty is a live stage show that’s an assault on the senses, a hell of a lot of fun and perfect for Wakestock!
1Xtra and Radio 1’s MISTAJAM focuses on breaking new music and shining a light on underground artists deserving of mainstream exposure, MistaJam is now regarded as one of the go-to-men for breaking new music in British radio. Preaching the gospel of Dubstep and Bass music to the masses, Jam has been instrumental in championing the scenes on national radio, helping propel the underground genres into the mainstream consciousness.
BBC Radio 1’s HUW STEPHENS is to return to Wakestock in 2013 for one if his now legendary sets. We love Huw here at Wakestock HQ, his passion for discovering and championing new music was spotted when at 17 he joined Radio 1 for its Nations output, to reflect the music scene in Wales. He has since gone from strength to strength, and has become one of the most well respected DJ’s in the country today. Huw champions the best new unsigned, underground and under the radar music and brings it to our ears via his Radio 1 show and DJ sets.
Swiss DJ and remixer extraordinaire CYRIL HAHN has, in the space of just a year, carved out reworkings of Destiny’s Child, Solange, Jessie Ware and more. He’s been celebrated by the likes of Diplo and Annie Mac for his minimal, R&B-influenced style. His remix of Destiny’s Child “Say My Name” now has over half a million plays on Soundcloud, countless tribute videos with over 2 million YouTube views and he has just completed his full European tour with sold out dates across the UK. Make sure you don’t miss him this year.
Joining the bill is fellow DJ ANDY C. In the world of electronic music, there are few bigger names than that of Andy C. Regarded as one of the greatest DJs ever to touch a turntable, the Ram Records founder is one of the most iconic and important figures in global dance music culture and drum and bass pioneer, and is at the forefront of one of the biggest and most powerful brands in dance music.
FRED V & GRAFFIX are Hospital Records latest signing, and their latest single “Goggles” has been receiving huge support from Radio 1 tastemakers Annie Mac and Zane Lowe. This duo create liquid Drum ‘n’ Bass with an ear for vibrant and sparkling hooks, and have quickly become one of the hottest properties in the scene.
Joining them is Sam O’Neill aka TCTS, the hottest new producer and DJ from Manchester. Attention has come courtesy of BBC Radio1, BBC Introducing and 6Music, thanks to Huw Stephens and Nick Grimshaw showing their support for 'Like This'. The track has now received a release proper via the ever exciting 'Just Us' label, packaged with a brand new lead track '1997'.  The release is inspired by 90s house, RnB sentiment, rolling beats, garage swing, and rave pianos – perfect for the Wakestock party crowds!
JACOB BANKS will also be hitting Wakestock this summer. You may not know his name yet but every record label managing director in the UK does. Jacob’s ability to write, play and deliver vocally shows there’s going to be no stopping this young star.  Tipped as one of 1Xtra’s hot ten for 2013, there are exciting times ahead for this young singer songwriter including a visit to North Wales in July.
The latest acts will join headliners EXAMPLE and MAGNETIC MAN along with ZANE LOWE, BASTILLE, THE 1975, JACKMASTER, MELÉ and MONKI. We can’t wait to welcome them to Wakestock this summer! With Example just finishing his current UK arena tour, Magnetic Man’s new album due out this summer, hot new band Bastille entering the singles charts at number 2 this week and are number one in the midweek album charts, plus the 1975 storming into the itunes chart Top 5, the line-up is shaping up to be one of the best yet!
We got loads more bands and DJs to announce over the coming weeks and months, plus news on the mind blowing wakeboarding, our infamous warm up party and entertainments galore up on the festival site. So make sure you join us in 2013.