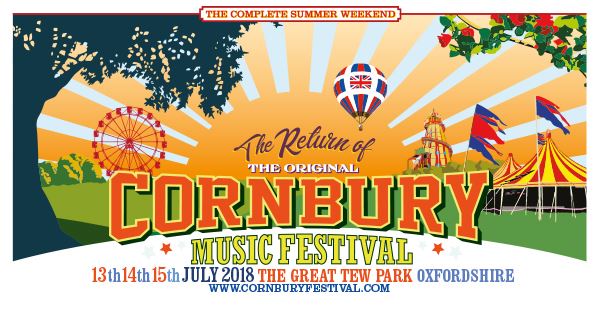 The afternoon of Friday 13th July launches with an acoustic set from Glen Matlock, who joined the Sex Pistols at just 16 years old co-writing most of the iconic album ‘Never Mind The Bollocks’ and hits such as ‘Pretty Vacant’, ‘Anarchy In The UK’ and ‘God Save The Queen’. Glen has played, performed and written with many greats from decades of music including; Iggy Pop, Ronnie Wood, The Dammed, Primal Scream, Mick Jones, Midge Ure, Gary Kemp and Wendy James. August sees the release of his long awaited solo album, ‘Good To Go’ which has a distinctly rock-a-billy sound and Cornbury festival crowds will enjoy a preview of some of his new material on the JACK stage at 5.20pm.

In keeping with the main stage all female line up on 14th July, headlined by Alanis Morissette, Marcella Detroit will headline the Jack Fm Tipee on Saturday afternoon. Marcella started her career with Bob Seger, before going on to co-write and perform with Eric Clapton on many of his classic hits. She has written for Aretha Franklin, Chaka Khan & Elton John, taking centre stage, when she partnered with Bananarama’s Siobhan Fahey as Shakespeare’s Sister producing several hits including the epic ‘Stay’ and ‘You’re History’.

Brian Mcfadden formerly of Westlife has had no less than 13 number 1 singles and a further 9 top 5 singles with  hits such as ‘Uptown Girl’ ‘I Have a Dream’ and ‘Flying without wings’. The 90’s pop sensation currently performs live as of one half of Boyzlife with Boyzone heart throb Keith Duffy and is in the studio writing a new solo album, due for release later this year.  Widely respected for his perfect pitch, vocal range and songwriting skills, Brian will be performing 3 songs with new material, from his forthcoming solo album, which has taken him into an exciting new musical direction. The tipi will be getting very soulful on Sunday 15th July!

Further artists over the weekend joining the JACK stage headliners will include; Liv Austen - Half Nordic & British beauty, hotly tipped as a rising star. Liv attracted much attention at this year’s ‘Country to Country’ Festival delighting audiences with her up tempo blend of catchy pop and country. North London born and bred Emily Capell has weekly residencies at Camden Town's Proud Gallery and Dublin Castle under her belt, as well as a string of festival appearances at the likes of  ‘Glastonbury’ and ‘Lattitude’, Emily is building an impressive fan base. Performing live sessions on BBC Radio London and Radio X, with her current single making its debut on 6 Music. Alternative pop act, signed to Boy George’s ‘More Protein’ label, Blair Jollands, is often hailed as New Zealand’s answer to Beck, with a songwriting style similar to Nick Cave. Indie songsmith Chris Simmons, has opened for the likes of Squeeze; The Kooks; Jackson Browne; The Maccabees; Seth Lakeman; Beth Orton; Finlay Quaye, Suede and Ocean Colour Scene. Squeeze legend Chris Difford has himself contributed to lyrics on several of Chris’s releases.

The lineup will be accompanied by acts from national radio station Union JACK. Union JACK champions the Best of British music, with an award winning new music show ‘Underdogs’. Some of the brightest British talent will be taking to the stage, and this is a one-off opportunity to see them on the brink of stardom. In addition various artists from the Cornbury line up will also be dropping into the JACK tipi throughout the festival.

Featuring  a wide variety of established acts and the very best up-and-coming artists. Union JACK’s local cousin, JACK FM, will be broadcasting their tipi sessions on Facebook Live throughout the festival. In honour of Cornbury’s all-female line up, the JACK tipi has followed suit, with Saturday’s bill in the tipi being all female, celebrating women in the music industry.