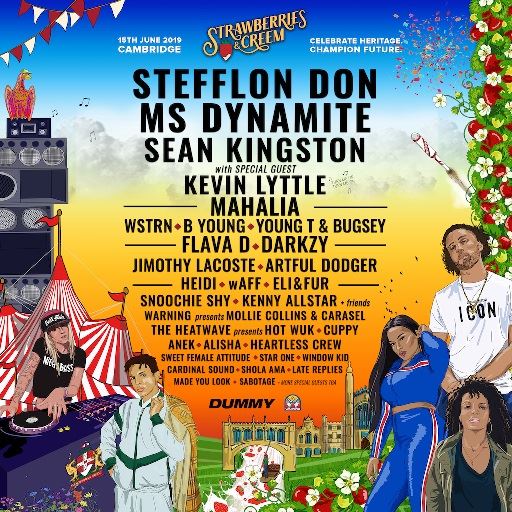 The up-and-coming independent festival returns to Cambridge on Saturday 15th June with their signature diverse line-up of Hip-hop, R&B, House, Bass and Noughties

Stefflon Don, Ms Dynamite and Mahalia are confirmed to headline this years Strawberries & Creemfestival, which will return to Cambridge on Saturday 15th June. Curated by a team of young creatives with an average age of just 25, the one day event stays true to its ethos of ‘celebrate heritage, champion future’ with a diverse bill for 2019. Representing the festival’s signature throwback element and bringing carnival vibes to Cambridge, “Beautiful Girls” hitmaker Sean Kingston will also headline, alongside special guest Kevin Lyttle whose debut single “Turn Me On” went on to become a club classic and one of Dancehall’s best loved anthems.

Established in 2014 in the majestic setting of Cambridge, Strawberries & Creem has become renowned for its authentic and feel-good line-ups that have seen a wealth of respected acts perform in recent years - counting Skepta, Wiley and Kano to name a few. With the 2019 edition set to be topped by MOBO winner Stefflon Don - who’s meteoric rise has seen her gain international success with French Montana, Tory Lanez, Jeremih, Sean Paul and Ne-Yo collaborations - the South London rapper will be joined by UK pioneer Ms Dynamite, who was honoured with an MBE last year for her services to music which count breakthrough hit “Ms Dy-Na-Mi-Tee” and the 2002 Mercury Prize.

Originally created as an end of year celebration for the students of Cambridge, five years on and the festival has successfully provided the city with an exciting, musically-diverse identity that continues to expand. From just 1,000 guests in its first year to now over 12,000, Strawberries & Creem stands tall as one of the UK’s fastest growing events. It’s also become renowned for attracting a slew of surprise guests, with 2018 counting over 20 unannounced artists who performed on the day - including Frisco and Shorty (Boy Better Know), EO, AJ x Deno, Ambush, MC Versatile and Abra Cadabra.

A real celebration of good vibes and the hottest names in Rap, R&B, House and Garage, Strawberries & Creem shows true support for UK music and this enthusiasm is reciprocated by the industry. Now a firm fixture in the summer festival calendar with a very bright future ahead.

Published on 05 February 2019 by Wayne Feltham