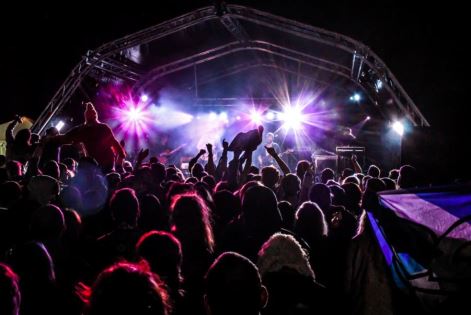 With one month to go until the second ever Electric Fields we are delighted to announce the addition of three more of the most exciting acts coming out of Scotland today.

The Xcerts have become well known for blowing the roof off every festival they play and we’re delighted to be welcoming them to Electric Fields to do just that, fresh from stand out performances at 2000 Trees and T In the Park earlier in the Summer! The Aberdeen band have had one of their most exciting years with tune “Shaking in the Water” breaking the two million barrier on Spotify.

KLOË is an 18 year old pop artist from Glasgow. With an EP set for release in Autumn 2015, KLOË has already shot up the Hype Machine, sold out her debut show, played at Radio One’s Big Weekend and opened eyes worldwide with her debut track ‘Grip’ and follow-up ‘Feel’. With support coming from BBC Radio One’s Zane Lowe, Huw Stephens and Phil Taggart, and blog support from Neon Gold, Pigeons and Planes and DIY, we are at the start of a very exciting year for KLOË.

The Little Kicks are a 4 piece band based in Aberdeen with a reputation for a great live show of heartfelt catchy upbeat indie rock songs that you can dance to. The band’s latest album entitled “Put Your Love In Front Of Me” was very well received critically and several tracks have enjoyed national radio support from Nemone, Lauren Laverne, Steve Lamacq and Tom Robinson again leading to airplay on BBC 6 Music, BBC Radio 1, Radio Scotland and XFM

Electric Fields will also be hosting a special warm-up gig with Pronto Mama, MØGEN and guests on the 8th of August at unique arts space, The Stove, in Dumfries. Tickets are very limited for this intimate show and are priced at £6, available from - http://www.ticketweb.co.uk/event/electric-fields-presents-tickets/188271

“With one month to go until Electric Fields were chuffed to bits to be adding even more names to the already stellar line-up, especially considering it’s three of the most talked about acts on the scene. We haven’t finished there either… We have a few more surprises up our sleeve that we’ll be revealing nearer the time.”