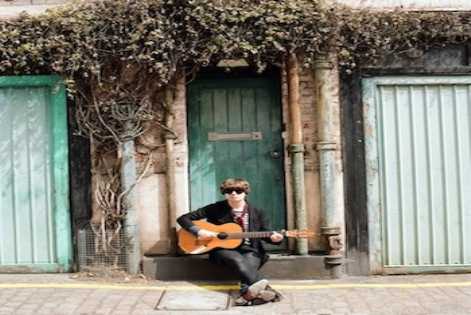 Fionn Regan has announced details of his new album 'The Bunkhouse Vol. I: Anchor Black Tattoo'

Just over a year after the release of his critically-acclaimed ‘100 Acres of Sycamore’, Fionn Regan returns with a new studio album 'The Bunkhouse Vol. I: Anchor Black Tattoo' set for release 28th January 2013.

Self-recorded in his Bunkhouse studio with a 4-track and a single microphone, 'The Bunkhouse Vol. I: Anchor Black Tattoo' is Regan’s most stripped back album yet and shows the artist bursting with imagination and humour. Regan has returned to his roots, with an album that shines a light on the strengths of the artist at work. Listen to one of the new album songs, ’Salt & Cloves' here: http://www.youtube.com/watch?v=cw3hd-QKJt0

'The Bunkhouse Vol. I: Anchor Black Tattoo' is Regan’s fourth studio album and is the latest addition to a family of highly acclaimed work including the Mercury Music Prize nominated debut album 'The End of History', the barn-storming 'The Shadow of an Empire' and the orchestral steeped epic that was '100 Acres of Sycamore'. During the past few years artists from surprisingly diverse quarters have singled out Fionn as having been an influence, and with an ever-growing list of noteworthy fans (Lucinda Williams, Rhys Ifans, Shane Meadows, Rankin, Justin Vernon) to his name, its clear that Regan’s music is quietly increasing in stature and is built to last.

Regan has consistently stayed true to his own path “I’ve always just followed my instinct, I’ve made some huge sacrifrices in order to work that way, but I think once you stop doing that and tailor make your music to fit, you’re not really an artist anymore. I think people respond to that and respect it.”

Which brings us to The Bunkhouse...

Regan says of the album “I made the record here by myself with a 4-track and one microphone. I did quite a bit of touring on my own earlier this year supporting Feist and although the rooms were big, I felt very much at home on the stage and after that I had a strong instinct to get right down to the brass tacks, back to the essense of what is it that I do as a songwriter, so that’s what I’ve done. You can call it folk but I feel in a lot of ways it’s like an Irish punk album, in that it’s pure, it’s stripped down, and it was made with just what I have at my disposal. Recording in this way also allowed me to work very quickly, I was documenting as I was writing, so these songs feel very fresh to me, straight out of the ground, which is a really great feeling.”