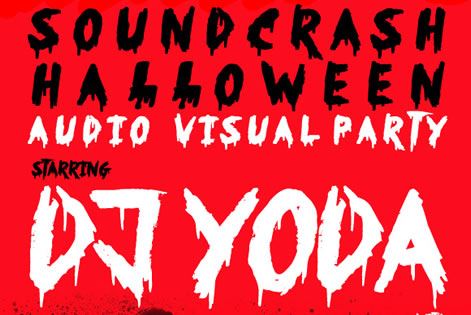 Duncan Beiny aka DJ YODA is not just a scratch DJ. His seminal 'How To Cut & Paste' series showcased a tongue-in-cheek mixing style. From releasing his debut album, 'The Amazing Adventures Of DJ Yoda' in 2006, he has also released five instalments of his 'How To Cut and Paste' mix CD series, the first of which came out in 2001. Alongside these, his latest artist album 'Chop Suey' came out at the end of last year. With influences that range from Funk, Reggae and Drum 'n' Bass to Big Band Swing and Hip Hop, his live AV sets are always varied, fresh, and hugely entertaining. Fresh from broadcasting the BBC’s first ever live VJ Mix on 6Music DJ Yoda is at the top of his game.

On August 11th 1973 the godfather of Hip Hop DJ Kool Herc threw a party that was to spawn a Worldwide movement. In 2013 Hip Hop turns 40! To honour this DJ Woody launches his new audio-visual DJ show as an ode to the music and culture that changed his and so many others' lives over the last 4 decades. 'Hip Hop is 40' chronicles and celebrates all things Hip Hop. Starting with the original breaks, the first rap records and through to party rockers spanning the 80's up until today.

Building on his groundbreaking AV shows 'Turntables In Technicolor' and 'Big Phat 90's' and utilising his trademark edits, animations, graphics and World champion turntablist skills. Expect this to be his most ambitious show to date!

Heady beats and blistering sounds come together with iconic music videos and obscure youtube gems as Solid Steel’s DJ CHEEBA dices and splices audio and video live on turntables and midi pads with a nod to his turntablist history and love of cut and paste music. Having spent the last couple of years playing some of the biggest venues in London and relentlessly touring all over europe and beyond, Cheeba has a proven track record of outshining his peers and lighting up stages with his quickfire mixing style and flawless selections of both audio and visual material.

A horror night of visual wonders, musical (and edible) treats, and a hell of a lot of fun awaits. Dress to kill.

Published on 02 October 2013 by Ben Robinson