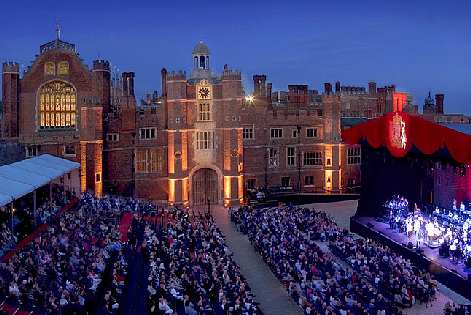 Historic Royal Palaces and PWR Events are delighted to announce the artists confirmed to perform in the stunning open-air court of King Henry VIII’s Palace from 8th June 18th June 2011.

The final line-up comprises of; international rock icon Bryan Adams (SOLD OUT) who will perform songs from his critically acclaimed acoustic CD Bare Bones, Westlife who will be bringing their Gravity tour to the Palace, and Festival favourite Jools Holland, who will return with His Rhythm & Blues Orchestra featuring Gilson Lavis with special guest star Sandie Shaw and guest vocalists Ruby Turner and Louise Marshall.
Kerry Ellis, billed as one of the most thrilling vocal talents on today's West End stage will join forces with founding member of Queen, legendary rock icon Brian May to perform Anthems at Hampton Court. The Australian Pink Floyd has also been added to the bill. Heralded by The Times as “perfect in just about every way”, with quadraphonic sound, 3d visuals and brand new laser and light show, the band imitates the magic of Pink Floyd.
James Blunt, will make his debut appearance at the Festival, as will America’s legendary singer-songwriter, Don McLean forever associated with American Pie and Vincent (Starry, Starry Night). Simple Minds and ex-Beatle, Ringo Starr and his All-Starr Band will treat Festival goers to an array of timeless classics.
Alfie Boe will headline the Festival Finale & Fireworks and will be joined by soprano Natasha Marsh and the Royal Philharmonic Concert Orchestra all under the watchful eye of Conductor Richard Balcombe. In a mixed programme from his repertoire, Alfie will delight the audience with both Classical pieces and show stoppers such as Bring Him Home from Les Miserables, Some Enchanted Evening from South Pacific and On the Street Where You Live from My Fair Lady. Bringing the 2011 Festival to a rousing finish, guests will also be treated to a stunning display of spectacular fireworks over the River Thames.
As well as the fantastic music line up, the Hampton Court Palace Festival is renowned for creating a truly unforgettable experience. Artists perform in the main courtyard of the magnificent Tudor Palace providing an intimate atmosphere for an audience of 3,000. Corporate hospitality is available in the State Apartments and Festival-goers can also arrive early (doors open at 1830) and enjoy a delicious picnic in the stunning palace gardens, courtesy of Jamie Oliver’s Fabulous Feasts.