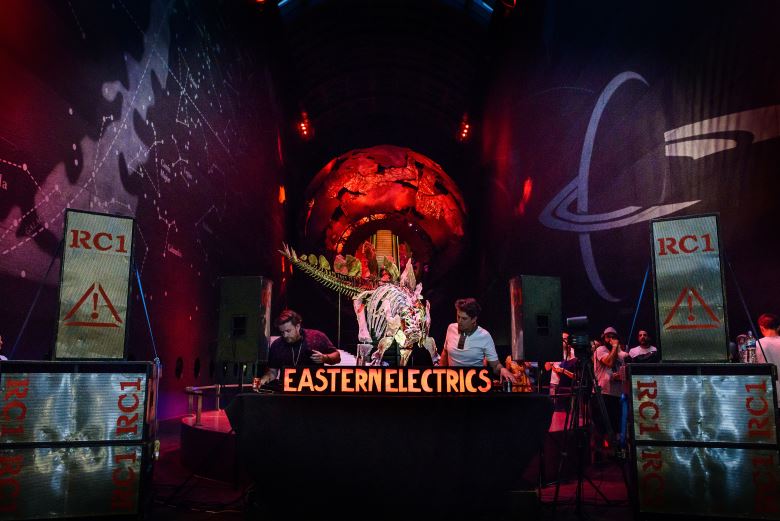 For 2018, Eastern Electrics is a two day soiree with something for everyone. Find house, techno, and big room bangers on Saturday with Jamie Jones, Skream, Hot Since 82, TQD, Patrick Topping, Waifs and Strays and more, and for those after a heavier fix, day two is a bass-laced bonanza with David Rodigan, AJ Tracey, Matt Jam Lamont, Conducta and Kurupt FM to name a few. Eight epic stages, delicious street food, fairground rides, dress up tents and more, Eastern Electrics is not just a festival, but a place where ravers can enjoy a full weekend of mischief with mates old and new. Check out the stages and line ups below for the sounds ahead and get ready for the mischief and mayhem in store with all the added extras and hatch a plan for a weekend full of all out debauchery as EE takes over Morden Park again this August 4-5th.

From The EE Mainstage with Paradise boss, Jamie Jones headlining, to Skream's reign in the Big Top, through to the much adored, laser-lit industrial Switchyard with Eats Everything and edible players, dancers are spoilt for choice with hefty underground club music from then and now. Feel the hot house heat at Defected in the House's club tent, shake through TQD's bass invasion, and indulge your luxe desires at Ministry of Sound on red carpet duties. Then, Sunday sessioners can truly celebrate the sound of London with RINSE FM's Mainstage set up or take a trip back to a golden era with RAM Records in the Big Top. Gun fingers up for Matt Jam Lamont's History of Garage Bass, or max out in style with Reggae Roast and the Star of EE Pub stage. For disco kings and queens, South London Soul Train's retro sound will fill Electric City, while So Fresh So Clean bring the 90's sass to Sunday's VIPs.

For those magical extras, Tropical Tea Party's Electric City takeover promises maximum summer vibes, soundtracked by Prince Fatty Sound System, Afriquoi, DJ Patife. Expect gigantic tea cups, palm trees, photo booths, and maybe even a few games of limbo. For loads of laughs and games galore - its a little festival paradise with the ultimate party crew. If you’re after something more plush, it’s all about VIP. From queue jump, posh loos and a stage hosted by clubbing institution on the Saturday, Ministry of Sound, catch Kate Simko, Waifs and Strays and more. The VIP experience is real; bespoke cocktail bar, a 60 mph Candyfloss Whizzer, an Edible Bubble Volcano cascading volcano of edible bubbles to bite out of the air - are just a few of the zany treats in store. Sunday’s VIP is all about maxing out, baller style. So Fresh So Clean bring their old skool hip hop and r’n’b flex - with a whole motley crew of selectors. Upgrade your ticket to VIP for only £40 extra on the Saturday, £20 extra on the Sunday.

ON SITE MISCHIEF & AFTER PARTY

Fairground rides, street food, glitter girls, dress-up tents and much more on-site madness will be part of Eastern Electrics’ festivities this year, adding another dimension to the big weekender. It’s a chance for ravers to let loose and indulge in all the treats at this Hedonist’s playground. Since their early warehouse roots, EE have grown into a UK clubbing mainstay, known for their flamboyant, fun and no holds barred attitude. This year Eastern Electric's infamous after party boasts a banging line-up across 3 rooms in Egg - catch big room beats, drops and warehouse pumpers from Matador, Guti, Mella Dee, Spencer Parker and more.

Eastern Electrics’ weekend long affair is set to be one of THE unmissable events of the UK festival calendar, featuring some of the biggest names in house, techno, bass, garage, grime, disco, reggae and everything in between. Full weekend tickets are available, or if you'd prefer to pick one day then that's easily done too - Sunday tickets especially are a steal at £30! Think Saturday if house and techno takes your fancy, and Sunday is bass is more your thing. Taking place in South London's lush Morden Park, it's an easily accessible location a stone’s throw of the station. Grab a ticket now to secure your place at Eastern Electrics 2018! Tickets and more info - http://www.easternelectrics.com/

Published on 01 August 2018 by Wayne Feltham