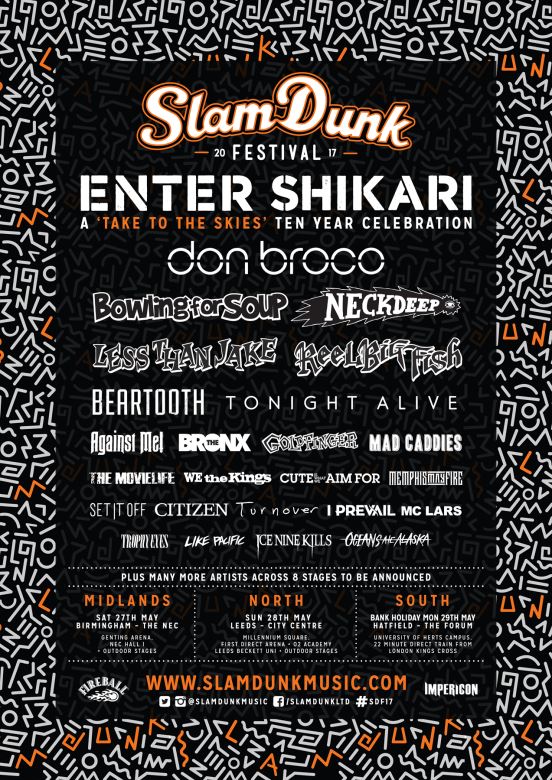 Showing no signs of slowing down, Slam Dunk Festival 2017 have unveiled that Neck Deep, Citizen, Turnover, Set It Off, Memphis May Fire, I Prevail, Ice Nine Kills and Oceans Ate Alaska will join headliners Enter Shikari for the biggest pop-punk festival of the year.

Welsh pop-punk sensations Neck Deep have enjoyed a mammoth 18 months, taking over festival main stages and leading a generation with their infectious singalong hooks on both sides of the Atlantic. With debut album 'Wishful Thinking’ already landing as one of the genre’s definitive releases of the past few years, their return to Slam Dunk is set to be a true coronation of a band primed to continue their emphatic journey.

Coming from the ever evolving Run For Cover Records stable, labelmates Citizen and Turnover will be making their first appearances at Slam Dunk Festival.

On their return to the UK for Slam Dunk Festival, Citizen say;

“Everyone in Citizen is ecstatic to return to the U.K. Likewise, it's exciting being able to play a fest and see some friends, something we're not often able to do overseas.”

Leading with anthemic singalongs and unrelenting beatdowns alike, both Set it Off and Memphis May Fire will be making their return to Slam Dunk Festival.

Set It Off, the upbeat Floridian mob who are renowned for their exhilarating live show will be bringing their extensive feelgood back catalogue to the festival with acclaimed singles such as ‘Forever Stuck In Our Youth’ and ‘Ancient History’. Metal powerhouse Memphis May Fire are also set to bring a high-octane performance to Slam Dunk Festival 2017 as they return to the stage with blistering new album ‘This Light I Hold’.

Cody Carson of Set It Off says;

"Slam Dunk is one of our favorite festivals to play! You guys never hold back, the energy is insane, and we get to see all of our friends in other bands that we usually don't get to see otherwise. We can't wait to play some new stuff for you all finally!"

"This will be our 3rd time playing Slam Dunk Festival & we couldn't be more excited about it! The UK feels like a 2nd home to us these days so we're itching to get back & play material from our new album 'This Light I Hold'!"

Fearless Records will be delivering an incredible metalcore invasion as the visceral I Prevail, melodic thrillers Ice Nine Kills and tech-heavy Oceans Ate Alaska are all set to storm Birmingham, Leeds and Hatfield this May.

Brian Burkheiser of I Prevail says;

"From the day we started I Prevail we've had an insane amount of support coming from the U.K.  The rock music community there is world class. We couldn't be more excited to be a part of a festival like Slam Dunk. We've been waiting a very long time to head across the pond and give it our all performing for the fans that mean so much to us. See you all soon."

""I couldn't think of a better way to return to the U.K. than by doing Slam Dunk. I've admired the festival from afar for years so it's very exciting to finally be a part of it."

'Slam Dunk's a huge festival we've all gone to for years and we're really excited to be playing this year's line up for the first time. Coming from Birmingham, we're stoked to be representing the UK's Midlands music scene!'

Kicking off in Birmingham on Saturday 27th May, the festival will travel to Leeds on Sunday 28th May before finishing up in Hatfield on Monday 29th May, once again ensuring the Slam Dunk Festival Bank Holiday Weekend is the only place to be to catch the finest in alternative music.

FULL LINE-UP TO DATE
Enter Shikari, Neck Deep, Beartooth, Tonight Alive, Citizen, Turnover, Set It Off,  Against Me! The Bronx, Goldfinger, Mad Caddies, Memphis May Fire, The Movielife, Don Broco, Bowling For Soup, Less Than Jake, Reel Big Fish, Cute Is What We Aim For, We The Kings, I Prevail, Ice Nine Kills, Oceans Ate Alaska, Trophy Eyes, Like Pacific.

Published on 01 February 2017 by Ben Robinson