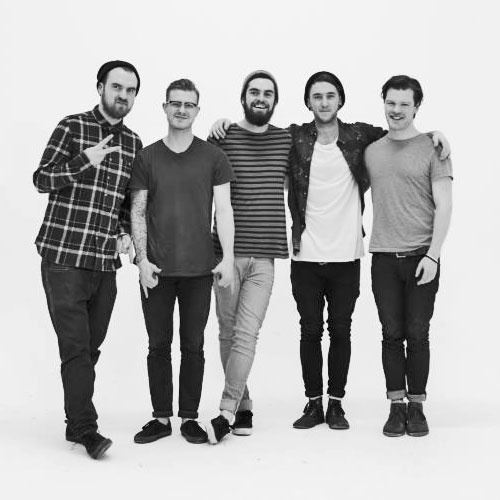 ZOΛX are a rock band based in London, 2013 has seen the 5 piece write and record their Debut E.P “New Oceans”, Recorded and Produced by Derya “Dez” Nagle of Black Bear Productions, and Mastered at Spectre Mastering Studios (Underoath, He Is Legend, Norma Jean). Adam (Vocals), Dan (Guitars), Doug (Guitars), Joe (Bass) and Jonny (Drums) are five individuals who have created a raw and honest sound based on respect for each other and a love of groove, melody and aggression.
Λdam (Vocals) - “I first met the guys just over a year ago, we were introduced by a mutual friend who I met whilst on Tour with my other band (Time Is A Theif). He knew the boys were looking for a singer, and to be honest, we instantly clicked, it just felt right, the first time we were in a room together it was so easy, my range fit comfortably over their changes, and their riffs complimented what I brought to the table. ZOΛX is a big part of my life now, I get to hang out and travel with 4 guys who I’m genuinely excited to tour and write with, however sadly for them, they will never perfect an Irish accent.
Dan (Guitar) - “I’ve known Doug and Jon for longer than I’ve not known them, we had our first band together, we shared a lot of experiences together too, first shows, first support slots, getting that first bits of merch delivered, all those exciting experiences. Playing with Joe and Adam is a just a natural progression. For me ZOΛX isn’t about firsts it’s about best friends, big tunes, good laughs and doing what we believe in. Truth.”
Doug (Guitar) - “From when I was about 13 Dan and Jon would come over to my parent’s house and jam, It’s always felt right playing with those guys, as we grew up and started gigging, other projects took over (Burn Down Rome, To Catch A Theif, The Bowery) and we stopped playing together as regularly. For me moving to London to start this project was the obvious choice. Five close friends, catchy music, it’s my ideal band to be honest.”
Joe (Bass)- “I first met the majority of the guys in the band roughly 5 years ago, when we first met we spoke about getting a project together, but with the amount I toured (Rise to Remain & Axe Wound) it wasn’t a possibility. When touring calmed down for me I wanted to be a part of something new and fresh, something that I built from the ground up and had a connection to, and most importantly with good dudes around me playing music I could really stand behind. To be honest I wanted something real, something from the heart, and that’s what we’ve done with ZOΛX.”
Jonny (Drums) - “ZOΛX is like coming home, two of my oldest mates, two good friends, It’s perfect, I get to sit behind that kit and groove whilst watching four of the best guys go nuts, and it’s something I believe in, we’re producing some honest, fun music and we’ve all got creative input on every level. I can’t wait for people to hear what ZOΛX has to offer.”