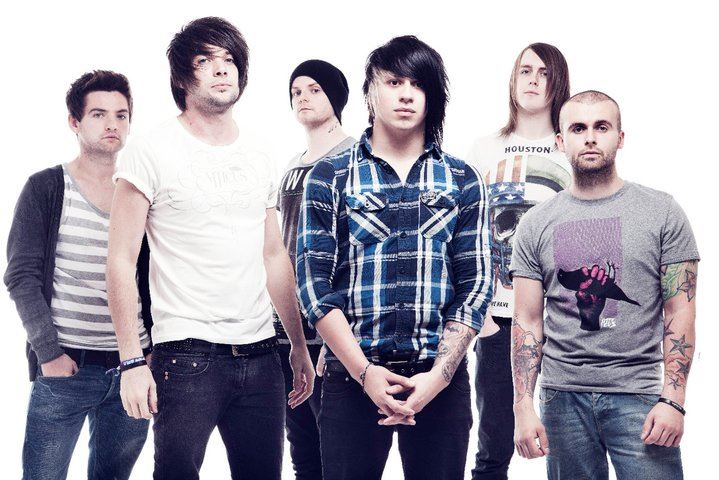 Yashin are an unsigned post-hardcore band formed in Glasgow, Scotland in 2006. School friends Paul Travers and Andrew McShane founded the band together, along with Paul McShane, who was later replaced by Lewis Millen, as well as Michael Rice and David Beaton.
The band name originates from the football player Lev Yashin, founding member Paul Travers was nicknamed after the footballer and the name was used for the band.
In 2007 they released their first EP Pay To Play, which contained 4 songs. In 2008 they released their second EP Miles Away But Getting Closer which gets its name from the track Heroes (Alive In Us Yet). This second EP featured two songs from Pay To Play; a re-recorded version of So We’re Named After Saints and an acoustic version of Tonight We Dance.
In October 2008 Michael Rice announced he was leaving the band due to personal reasons. The rest of the band auditioned potential vocalists for the band and in 2009 announced that Glaswegian Kevin Miles and American Harry Radford would both be fronting the band. The two had auditions one after the other.
In 2010 they released their first full length album Put Your Hands Where I Can See Them which featured the singles Friends In High Places, Stand Up and Get Loose! It also featured a cover of Everytime.
In 2012 they released Put Your Hands Where I Can See Them Revolution. This contained 4 bonus tracks: Awake While I’m Asleep (Dubstep remix), and rerecorded versions versions of Mr Hyde, The First Rule Of Fight Club and Dirty Slut.
Yashin shared the stage with many bands including: Lostprophets, Enter Shikari, The Used, Gallows, New Found Glory, Madina Lake, The Blackout, Kids In Glass Houses, We are the Ocean, A Day To Remember, Red Jumpsuit Apparatus, Black Veil Brides, Papa Roach, Glamour Of The Kill, Skindred and Limp Bizkit. They have also played festivals such as Slam Dunk, Taste of Chaos, Download, Nova Rock, Hit The Deck, Wakestock and Pukkelpop.
They released their second album We Created A Monster in June 2012. They had previously the singles New Year Or New York the forthcoming album, and Make It Out Alive, which both appeared on the album. Later in the year they released a video for Runaway Train, and released the Runaway Train EP, which along with the title track had on it covers of Wherever I may Roam (also featured on Kerrang's Black Album Covered) and One Step Closer, as well as acoustic recordings of other Yashin songs.
They went on a headline tour of the UK, with support from We Butter The Bread With Butter, Shadows Chasing Ghosts and Azriel. During the tour they also performed at the Vans Warped Tour UK. Before the tour started, the band announced that guitarist Lewis Millen was leaving the band, and was replaced with Connor MacLeod for the We Created A Monster tour.
In 2013 they will support We Are The Ocean through the UK, including playing Radstock Festival.
Members:
* Paul Travers – Guitar (2006 – present)
* Andrew McShane – Bass, Backing Vocals (2006 – present)
* David Beaton – Drums (2006 – present)
* Harry Radford – Vocals (2009 – present)
* Kevin Miles – Vocals, Piano (2009 – present)
* Connor MacLeod - Guitar (2012 - present)
Previous Band Members:
* Paul McShane – Guitar (2006)
* Michael Rice – Vocals (2006 – 2008)
* Lewis Millen – Guitar (2006 – 2012)
Releases:
* Pay To Play (EP 2007)
* Miles Away But Getting Closer (EP 2008)
* Put Your Hands Where I Can See Them (LP 2010, re-released with bonus tracks 2012)
* Stand Up (Single with B-Side Black Summer (Acoustic), 2011)
* We Created A Monster (LP 2012)
* Runaway Train (EP 2012)