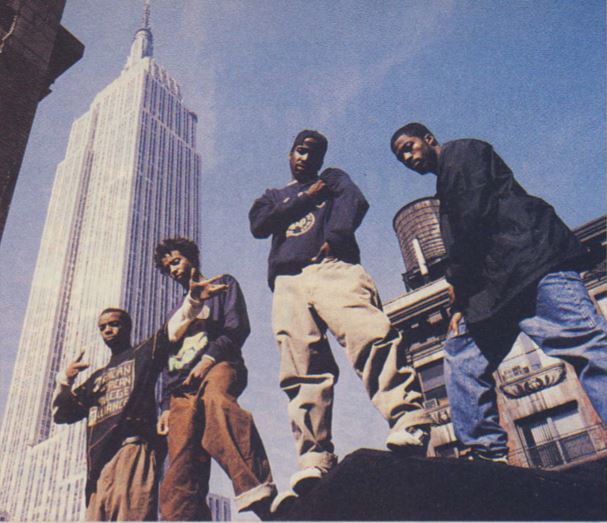 The Pharcyde is a West Coast underground/alternative hip hop group. The group was formed in 1991 in South Los Angeles, California, United States, where the group's members grew up. The group was one of the most well known of the first wave of alternative hip-hop acts.
The original members of the group are "Slimkid3" (Tre Hardson), "Fatlip" (Derrick Stewart), "Imani" (Emandu Wilcox) and "Bootie Brown" (Romye Robinson). The group is best known for their hit singles "Passing Me By" (which crossed over to alternative rock radio) and "Runnin'", and their debut album Bizarre Ride II the Pharcyde.
History
1991-1996
After a live performance of their song "Ya Mama" for Delicious Vinyl record execs, The Pharcyde signed a record deal with the label. "Ya Mama" was released as their debut single in 1991. The foursome, with producer J-Swift, recorded their debut album Bizarre Ride II the Pharcyde, released in November 1992. The album was highly acclaimed, and became one of the most praised and influential Alternative hip hop albums of the 90's. Sales were moderate-to-good, the album was certified Gold by the RIAA in 1996. Their second single "Passing Me By" became a minor Billboard hit, peaking at #52 on the Hot 100. The song was later featured in the hit movie Big Daddy and was also a crossover Modern Rock hit. Problems between the group and producer J-Swift began during the recording of the debut. Swift split from the group before completion of the album [which is why the final recording, "Otha Fish", is the only song not produced by J-Swift]. Swift started a crack habit, which he is still trying to recover from.
After the Bizarre Ride album was released, the group began touring with A Tribe Called Quest and De La Soul, culminating at an appearance at the Lollapalooza show in 1994. In 1995, The Pharcyde released their sophomore effort, Labcabincalifornia. The album received mixed reviews, due to a different musical direction from the light-hearted playfulness of their debut. The album included another big crossover hit, "Runnin'", peaking at #55 on the Billboard Hot 100. This single was later featured in the movie 8 Mile, as well as the More Music from 8 Mile soundtrack. Labcab featured production from future super-producers Jay Dee and Diamond D. Album sales this time around didn't fare as well, the group wasn't able to reach Gold status again. Problems between Fatlip and the other MC's began to rise after this album, resulting in his split from the group. In a video interview with director Spike Jonze, featured on the bonus DVD from his solo album, Fatlip stated that he started sniffing cocaine, he was kicked out of the group due to his addiction to cocaine.
1997-present
The group was largely missing in the Hip Hop scene between 1997 and 1999. The three remaining members returned in 2000 with an EP titled Chapter One: Testing The Waters. They released a full studio album later in the year titled Plain Rap. The album was received with a luke-warm reception, critically and commercially. Soon after the release, member Slimkid3, now going by his birth name of Tre Hardson, split from the group to pursue a solo career. In 2002, he released his solo debut "Liberation".
The two remaining members, Bootie Brown and Imani, continued on with the group name, and released an album in 2004, Humboldt Beginnings. The album received even less attention critically and commercially than their last effort. Former member Fatlip released his solo debut in 2005, titled The Loneliest Punk. A Pharcyde compilation was released in 2005, titled Sold My Soul-The Remix & Rarity Collection, featuring a number of remixes and rare songs.
In 2003, Bootie Brown was featured on the DJ Danger Mouse and Jemini the Gifted One Ghetto Pop Life album track "Medieval".
In 2005, Bootie Brown featured on the Gorillaz track "Dirty Harry".
2007, Fatlip featured on Chemical Brothers track "The Salmon Dance."
On Delicious Vinyl's official YouYube page, it is said that more music from Tre Hardson, Fatlip, J-Swift and St. Imey are expected to be released early 2008. It also calls these artists the label's 'Dream Team'.
On April 22, 2008 it was announced that The Pharcyde would be reuniting for the annual Rock the Bells Festival Series. The first performance was Saturday, July 19 in Chicago.[3]
Remixes of The Pharcyde's "Runnin" and "Passin' Me By" appear on Delicious Vinyl's 2008 release, Rmxxology.
The Pharcyde toured Australia in February 2009 as part of the Good Vibrations Festival, and played in Sydney, Melbourne, Gold Coast and Perth, which was headlined by Fatboy Slim.
Discography
Bizarre Ride II the Pharcyde
* Released: November 24, 1992
* Certification: Gold
* Billboard 200 chart position: #75
* R&B/Hip-Hop chart position: #23
* Singles: "Ya Mama"/"I'm That Type of Nigga"/"Soul Flower", "Passing Me By",
"Otha Fish", "4 Better of 4 Worse"/"Pack the Pipe"/"Return of the B-Boy"
Labcabincalifornia
* Released: November 14, 1995
* Billboard 200 chart position: #37
* R&B/Hip-Hop chart position: #17
* Singles: "Runnin'", "Drop", "She Said"/"Somethin' That Means Somethin'"
Plain Rap
* Released: November 7, 2000
* Billboard 200 chart position: #157
* R&B/Hip-Hop chart position: #67
* Singles: "Trust"
Humboldt Beginnings
* Released: July 13, 2004
* Billboard 200 chart position: -
* R&B/Hip-Hop chart position: -
* Singles: "Knew U"/"The Uh-Huh"
Compilations and EPs
Chapter One: Testing the Waters EP
* Released: March 14, 2000
* Label: Chapter One Entertainment
Cydeways: The Best of The Pharcyde
* Released: January 16, 2001
* Label: Rhino Records
Instrumentals
* Released: September 13, 2005
* Label: Delicious Vinyl Records
Sold My Soul: The Remix & Rarity Collection
* Released: November 8, 2005
* Label: Funky Chemist Recordings
myspace.com/thepharcyde
thepharcyde.com