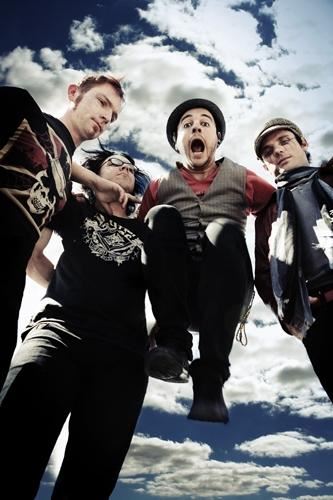 In their native South Africa, there’s no rock band bigger than The Parlotones. The Johannesburg-bred quartet have headlined the 20,000-seater Coca Cola Dome in their hometown in 2009, performed at the World Cup Kickoff Concert to an audience of a billion in 2010, and were handpicked by Coldplay to open the British band’s stadium shows in Johannesburg and Cape Town in 2011. Also last year, The Parlotones staged an original rock theater production, Dragonflies and Astronauts, which was broadcast live around the world in 3D via DIRECTV and in 2D on Facebook. (The 3D broadcast was so well received Stateside that the satellite provider scheduled 100 re-airings, while more than half of the worldwide viewership on Facebook hailed from the U.S.) Dragonflies and Astronauts wove a narrative through the band’s catalog, including 16 songs that were Top 40 hits in South Africa.
The Parlotones’ three studio albums —2005’s Radiocontrolledrobot, 2007’s A World Next Door To Yours, and 2009’s Stardust Galaxies, have racked up numerous platinum and gold certifications and South African Music Awards, while their three live CD/DVD packages (culminating in 2010’s Live Design) have cemented their reputation as a fiery force to be reckoned with onstage. Confronted with the sight of powerfully expressive frontman Kahn Morbee leading the band — which also includes guitarist Paul Hodgson, bassist Glen Hodgson, and drummer Neil Pauw — to soaring emotional heights during their Fall 2011 club tour of the U.S., the Boston Herald predicted that “The Parlotones could become huge here. Killers huge, Muse huge, Coldplay huge.” Filter magazine reckoned that “their earnestness, work ethic, and charm may be their biggest weapons.”
Those qualities will serve The Parlotones well in 2012 as they prepare to expand their loyal fanbase beyond South Africa and Europe (where they also have a devoted following) to the United States with the release of their new album Journey Through the Shadows, via their own Sovereign Entertainment label, on May 8th. “America dictates trends around the world,” Morbee says. “If you’re big there, the rest of the world listens. It has a ripple effect. We would be very proud to achieve success in the U.S. because very few artists from our country have managed it. I think for a long time, South Africans have had an inferiority complex in terms of our place in the world and our relative insignificance compared to the super powers. It would be nice to have a success story, especially in a nation that needs uplifting, and instill in folks back home that ‘can do’ belief.”
To achieve their goal, The Parlotones have crafted the kind of melody-minded arena-filling songs that transcend language and culture barriers on Journey Through The Shadows. First single “Save Your Best Bits,” with its theme of not allowing negative things from the past to affect the good parts of your soul, and the celebratory “I Am Alive” are about catharsis. They chase those moments of universal human experience when everyone in the room is uplifted by a shared emotion. “My goal is to connect with people across the world, and I think the human condition is very similar regardless of where you are,” Morbee says. “I think the theme of these songs is hope and that life is worth living regardless of its ups and downs.”
That theme informs the album’s title, Journey Through The Shadows, which, Morbee explains, is a metaphor for the human experience. “You’re not given a guidebook or map at birth that guarantees the smoothest path,” he says. “Ultimately, we all walk through with a candle that only allows us to see so far in front of ourselves. You never know what’s around the corner, so it’s an analogy for life.”
In keeping with The Parlotones’ big themes are big ideals. Ever since these four school friends formed the band in the Johannesburg suburb of Roodepoort in the late ’90s they have always aspired not only to have fun making music, but also to give back to their community. Over the years, they have raised funds and awareness for a variety of social and environmental organizations, lending their high profile to initiatives such as Live Earth, Earth Hour, The South African Broadcasting Corporation’s Carbon Free campaign, Nelson Mandela’s 46664, and Live Earth’s Run for Water, among others. They are also ambassadors for the anti-poaching organization Rhino Force, United Against Malaria, and several other non-profits that combat problems that acutely affect South Africa. In March 2012, they will join with Africa Unites for a climb up Mt. Kilimanjaro to raise global awareness about ending violence against women and girls in Africa. The band sees the music and the activism, as well as their other creative business endeavors (the band has its own boutique wine label, which has released three highly successful blends) as one and the same: methods of expression, communication, and connection.
“People in the public eye have the ability to spread a message very quickly and effectively,” Morbee says. “So we try to do so when it concerns issues we feel strongly about. But we never want to come across as a band that's preaching. All we're really doing is drawing attention to causes that we support. South Africa is our home and home to our families and our friends. We certainly want to make sure they have a bright future. If we can get involved and encourage people to get involved, it can only have positive effects.”
The Parlotones are excited to be representing their homeland and shining a spotlight on it in the process. “Every band dreams of making a living, touring, and having a large fan base around the world,” Morbee says. “Those were our aspirations from the beginning, but because the music market in South Africa wasn’t developed, they were very difficult to achieve. We had to pave our own way. For me the success is not in what we may eventually achieve but in actually taking the journey. Yes there's a lot of risk associated, but we’ve soaked up such a wealth of experiences that it makes it all worthwhile.”