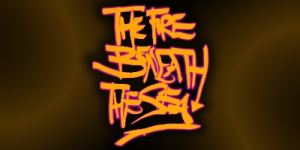 The Fire Beneath The Sea started it’s life on top of The Hill. The first 4 members, and 4 friends, Armen Starfish, Scuba fly Jesus, Kylie Unlikely and Seagull Tradstool, whilst at Hoofer Doofer music festival in Bangor, 2011, decided to leave the warm confines of the festival and go off on an adventure in the local surroundings. After climbing halfway up through a steep piece of woodland and then finally giving up, they bounded back down through the trees and then found The Forcefield, where they planted The Sea and basked in the sun. The following day they returned to the forcefield and then climbed up The Hill, where they sat down after a day of open minds and open hearts, and:
“watched the clouds roll away from the bay, happily sat in the sun, and I can tell you it was no ordeal.”
The scene was beautiful, as was the company, but not so much the mountains of sheep shit they had to walk through to get there. Upon the Hill, The Scroll was written, and The Fire Beneath The Sea was born. Maybe, one day, the scroll will be shared with the world….for now, it rests deep in the heart of Haden’s soul….(more about Haden later).
On that day, they found Terra Byte, a discarded ram skull, alone, cold and full of potential. Overwhelmed by a sense of purpose and responsibility, they took him home, cleaned him up and nursed him back to health, and they exclaimed:
“We’ve got a ram’s skull on a bamboo pole painted yellow with a mad red stencil!”
Over the following weeks, Lerraff Zafgir, the wolf in woods (who originally killed Terra Byte, causing the human resurrection as…well, Terra Byte) joined the team of sea-dwelling creatures.
Closely following was Chairman Meow, a half cat, half cow hybrid, who unlike his feline brethren was attracted to the waters in front of him.
Terra Byte himself then decided to forgive Lerraff for his murder, as, to be fair, he wouldn’t have existed were it not for Lerraff’s actions, and joined the flaming gang himself.
A phantom like canine, adept in the arcane act of bassery, Mr Barkerchop appeared, his funky aura attracted to and attracting TFBTS.
Doorag Jesus, great lord of the turntables descended, having seen the exciting glow from these firey maaafudgers from the heavens. He brought divine rhythm and funk to the team.
Sometime among this, a mysterious gerbil joined the gang, though no-one can be sure when and where exactly, as he is invisible, and could have been there for any amount of time. All we know is that The Gerbil is a see-through seaman.
In this form, The Fire Beneath The Sea began their adventures, recoding and writing a plethora of songs that reflected their shared experiences in formation and development. Spreading their message on the streets and in the clubs of Liverpool, they quickly earned the interest and attention of people looking for a more positive, accessible route into hip hop and beyond.
After a year or so, life inevitably brought together more members of Liverpool’s deep and richly populated talent pool and friends to further develop the Fire that the band could conjure:
Myo, a saxophonist of huge presence and ability,
Fluteman, a mysterious man of funky flute insanity,
Moscow Hughes, adept in the arts of guitar mastery,
Captain Morgan, unbelievably talented smasher of drums,
Raffe, head trumpeter and horn-smashing hero,
Ben Bielicki, saxophone supremo and iPad synth smasher,
Lady Lea, soulful, experience-drenched voice that wows all crowds.
Their music defies genre-classification, and by it’s very nature is intended to surprise, wow, excite, and above all else, make you dance like nothing matters. With lyrics deeply rooted in positivity, forward-thinking and the more soulful side to life, combined with a collective hatred for the corporate and the spoon-fed, not only is the music incredibly effective and astonishing, but the tracks carry genuine, heart-felt meaning.
In the following months, The Fire Beneath The Sea in it’s new form of a full band played their first live gig in October 2012 at The Attic, Liverpool. Since then, pace has been steadily picking up, to this time, where festivals have been confirmed, and we have played in such venues as The Kazimier, 02 Academy Liverpool, Camp and Furnace, Zanzibar, Mello Mello, Bumper, The Magnet and others. With regular gigs (and offers getting more and more frequent) the future is looking very firey indeed. Having supported US hip hop super group ‘Ugly Duckling’, UK legend Dr Syntax and DJ extraordinaire DJ Woody, The Fire Beneath The Sea have been conceived in waters rich with potential.
Now, as The Fire Beneath The Sea becomes fully stoked, it is time to,
Bring the fire to the surface….