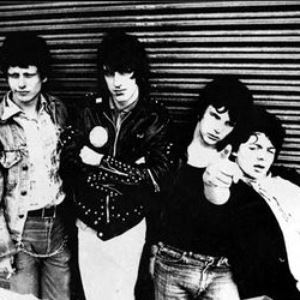 Slaughter & the Dogs are an English punk rock band that formed in the mid 1970s in Wythenshawe, Manchester, England. They were one of the first UK punk bands to sign with a major label, Decca Records.
The name "Slaughter & the Dogs" was created by singer Wayne Barrett in 1975 by combining the names of Diamond Dogs and Slaughter on 10th Avenue, two of his favourite albums. They were one of the first punk rock bands in North West England. They supported the Sex Pistols at their now-legendary gig at Manchester Lesser Free Trade Hall on 20 July 1976. This concert, more than any other single event, spawned Manchester’s punk scene. That scene was concentrated around the Electric Circus Club and gave encouragement to several bands, including Alberto y Lost Trios Paranoias, the Buzzcocks, John Cooper Clarke, the Distractions, John Dowie, the Drones, the Durutti Column, the Fall, the Freshies, Joy Division, Magazine, the Nosebleeds, the Passage, as well as Slaughter & The Dogs. As one cultural commentator observed, "London had the Roxy, Manchester had the Electric Circus".
The band befriended Rob Gretton, later to manage Joy Division, and with his financial help became the first band to release a single on Manchester’s independent record label Rabid Records. In 2001, this debut single, "Cranked Up Really High" (originally released in June 1977), was included in Mojo magazine’s list of the top 100 punk rock singles of all time. It also appeared on Streets, which has been cited as an "essential" compilation album of early UK punk bands from a variety of independent record labels. In 2006, "Cranked Up Really High" re-appeared on the Paul Morley compiled three-disc box set, North by North West: Liverpool & Manchester from Punk to Post-punk and Beyond (Korova), an overview of the punk, new wave and post-punk scene in those two cities.
The band were frequent visitors to London, and became one of the pioneering punk bands that played live in the first few months of the Roxy. They played their first concert in January of the same year, supported by the Adverts. They headlined twice in February and once in March of some year, supported by Johnny Moped. In April of some year they were supported by the Lurkers.[8] Their live renditions of "Runaway" and "Boston Babies" were included on the Harvest Records compilation album Live at the Roxy WC2.
After signing to Decca, the band released the popular "Where Have All the Boot Boys Gone?" single in late 1977, followed by "Dame to Blame" and "Quick Joey Small". Their debut album, Do It Dog Style, was issued in May 1978.
Barrett left the band after the March 1979 four-song EP "It’s Alright". The group released a single, "I Believe", in June 1979 under the name Studio Sweethearts.
A reformed Slaughter & the Dogs was rejoined by Barrett later in 1979 for one more single, the band's first on DJM Records. "You're Ready Now" was a cover version of Frankie Valli's 1966 solo single.
At the end of 1979, Ed Garrity (of Ed Banger and The Nosebleeds) replaced Barrett as frontman, and the band shortened their name to Slaughter (not to be confused with other bands with the same name).
Barrett and Rossi reformed the band to headline the legendary Holidays in the Sun Festival in 1996 with the addition of bass player Nigel Mead and drummer Noel Kay. A newer lineup with bassist Jean Pierre Thollet continues to record, tour and headline music festivals.