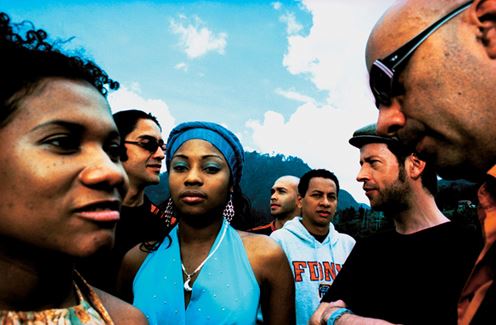 Sidestepper began as a solo studio project in 1996 for main man Richard Blair, who had first gone to Colombia in 1993 to work with renowned folk singer Totó La Momposina -- the two had met at Peter Gabriel’s Real World studios where Richard worked as an engineer. The result was the first album, 1997’s Southern Star featuring the Latin drum and bass tune ‘Maine’.
The project soon developed into a production and writing duo with colombian songwriter Ivan Benavides, and has since become a full live band. The two began to write together, producing the future club classic and sidestepper’s first vocal tune - Logozo in 1997. Two years later, the band signed with Chris Blackwell’s Palm Pictures. Again Ivan co-wrote and produced and ‘More Grip‘ was released in 2000, a homage to a salsa night out in Bogotá.
Sidestepper began to play live for the first time, playing gigs in the UK and across Europe, at Glastonbury and Roskilde amongst many others, and Richard continued to DJ in the UK and US. Their shows became legendary, they guaranteed a great party that starts on stage and resulted in a collective and euphoric experience, genuinely contagious. Meanwhile, writing work had begun on 3am (In Beats We Trust), as Richard travelled between London and NY where Ivan was living. The two recorded the core of the album in Bogota in 2002, some eventually unused sessions in Jamaica, with Cuban singer Ronald Infante in Havana, and MC’s Rubi Dan and Juxsi D in London. The mix was done in autumnal London, and 3AM was released to critical acclaim in 2003.
Richard returned to Bogota to form a live band that would be based in Colombia; and between old hands like Janio Coronado and Teto Ocampo, and a then new talent Erika Muñoz, a special magic emerged with this incarnation of Sidestepper, which vowed audiences in Colombia, Mexico and the US for the few years.
After touring extensively with the band, Ivan and Richard wanted to make a record written specifically for each member. The writing and original tracking were done at a farm outside Bogota, and mixing was done at a studio in the city. ‘Continental’ was released in July 2006.
Today, Sidestepper sound had expanded far beyond its original fusion of classic salsa and club beats to take in everything from deep Colombian folk influences to hip hop via cumbia, dancehall reggae, dub and afrobeat, layering infectious melodies and crisp harmonies on top of rock solid beats.
In the process, Sidestepper has helped transform the Colombian music scene, inspiring a new generation of young beat scientists to marry latin music with cutting edge beats. The originator that kick started the new wave of electro acoustic colombian music.
A lot of great talents have passed through the group, many of whom have gone on to great success with their own bands, like Goyo from ChocQuibTown, Pernett, and Sergio Arias from Malalma.
Sidestepper is now conformed as an 8-piece band, and are currently in the studio making a new record for release in the spring of 2010.
The current line up is
Janio Coronado, Edgardo Garcés and Erika Muñoz, on vocals
Teto Ocampo, on guitars
Pedro Ojeda, on drums
Juan Carlos Cuello "El Chongo", on Percussion
Iván Benavides, words and melody
Richard Blair, on bass and beats
www.sidestepper.net.